Book review: A Gentleman in Moscow 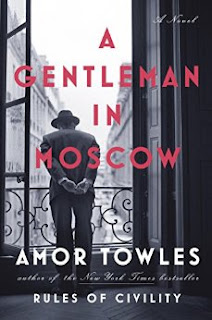 This book took me a long time to finish, not because I didn't have time for it, or because it was too boring, but simply because is so beautifully written that even me, the book-addict, need some time to think about some pages or just fully taste every word. For its style and elegance of writing and the flow of words, it is one of the most beautiful books I've read in a long while - and if you watch this blog, it is easy to guess that I spend most of my free time reading.
Count Rostov is condemned by the newly installed Soviet power  - more precisely the Emergency Committee of the People's Commissariat for Internal Affairs - to life house arrest at the Metropol Hotel, in the center of Moscow. His fault, a poem labelled by the 'people's leaders' as reactionary. (In fact, the truth about the authorship of the poem will be revealed at the end of the story). The count accepts its fate with stoicism, and starts a life in a 100 square meter room, with the world events unfolding outside the hotel - including the WWII, Stalin's death and the dramatic changes underwent by the Soviet society. The time spent in confinement - with a schedule including eating at the restaurant or chatting with the personnel or guests or reading Montaigne's essays - is a permanent remembrance and re-enacting episodes from the past, from trips abroad to morsels of civility and noble behavior, a rara avis in a society without solid roots, as the newly built Soviet world.
Nurtured by noble love towards Russia - asked about commissar Vyshinsky at the trail why he returned he said that he 'missed the climate' - , which he refused to leave, his story is a static version of the usual night train stories of the Russian literature, when during the ride, complete strangers share the deepest feelings and life episodes never told to anyone. In this case, count Rostov is careful to keep his life episodes in different baskets. He remains a master of the old world, but he remains faithful to himself and his independent spirit, fully proficient in mastering the circumstances with dignity.
At Hotel Metropol, he experiences love, is visited by his old friends, is making new friends, can practice his foreign languages, he even get permanent updates about the 'outside world' through the various communist leaders visiting the premises. It is a world in itself, an interior universe where the choice for life is strong enough for giving the motivation for making the best of each day.
The book is also well documented, with chosen references about Russian literature and society and political evolution. I've read many books dedicated to Soviet life, including literature, and I may say that this one is completely different. Not only it covers a completely different angle, when you were afraid that after so many years, the result is either another account of gulags and Siberia, or a self-sufficient predictable story but it uses a mix of Russian and British classical literary art, skilfully pondered and creating a very interesting unique literary work.
It is a philosophical book, based on history, but first and foremost, an excellent book. Last but not least, the ending and the last part of it is surprising. In a book where there are not too many 'events' taking place, one can expect a certain monotony, but in the real life of spirit one episode is never similar with the other. The ending is like no other endings, and it made me happily smile. After the thriller-like rhythm and some spy story, it settle down beautifully.
It is a book about love of spirit, a world that used to be and the loyalty towards its one's values. It makes the reader enjoy the pleasure of the lecture and seriously reconsider the intellectual pleasures. For some, there could be the only ones that really matter.

Rating: 5+ stars
Disclaimer: Book offered by the publisher in exchange for an honest review
Posted by WildWritingLife at 21 January