Stories from the Rotten Row 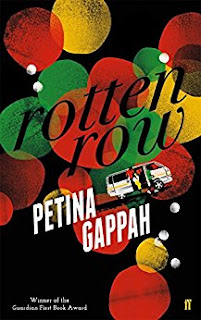 It is almost impossible sometimes to dissociate an author and its works from its original environment and country of origin. Particularly if the author is outside our usual literary comfort zone. In many such cases, the first line of the book review insists to mention some references to the passport identity of the author.  The problem in such cases is that creates already the bias of placing the work in the context, neglecting details regarding the human and literary aspects as such.
Rotten Row, by Petina Gappah is a collection of short stories has a clear geographical localization: a main street in Harare, the capital city of Zimbabwe, crossed among others by Robert Mugabe street, in the honor of the president in office since 1987. It is also the place where the Magistrate Court is situated, the delivery and interpretation of justice being one of the recurrent topics of the stories. Petina Gappah herself is a lawyer by profession.
Each story starts with a Biblical sequence, also translated in an original dialect. Through the stories, expressions or even full sentences, not all of them translated, are inserted, adding more genuine ambiance. The characters from one story may appear in other story too, mirror reflections of a life where the individual can hardly survive and exist beyond the context of the big numbers. Either it is the family, the local church, the society or the crowded bus, the humans of Rotten Row are rarely alone. When they leave the country, they will seek the same comfort of the groups, mostly virtually, through the virtual forums.
Everyone is longing for something, trying to achieve their aims, but achieving the aims reveals a tragi-comical mixture of beliefs. The author is not condescending when tells the story of the search for magical remedies for health, wealth or kindling the flame of a fading love by using baboon piss. The story is told with the sharp mindfulness of the observer, wrapping the characters into their humanity. The reader should expect to encounter deep cruelty and indifference, corrupt rapacious bureaucrats and policemen, shameless and vane NGO activists and acts of justice who aren't right. From a story to another one gets caught into the net of facts and stories and you can hardly want to go out. Rotten Row stays with you long time after the book is over.

Posted by WildWritingLife at 04 February