An Excellent YA Fantasy: Rosemarked by Livia Blackburne 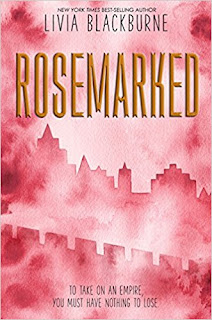 I've discovered Livia Blackburne a couple of years back, on Twitter, and followed fascinated her blog, A Scientist's take on writing. I've followed her insights about the brain reactions to (good) writing and also had a look at Poison Dance, her novella, which I've found interesting but not perfect enough to make me very 'wow'-ish about it.
However, Rosemarked, a story following very different character, the healer Zivah and the soldier Dineas, brought together by fate and a strange malady spreading over an empire, is an outstanding literary YA fantasy achievement. Through words and well crafted actions, Blackburne created a fantasy world in itself, with its own borders, legacy and history, where the readers is subconsciously made part of and hard to leave at the end of the story.
'Everyone knows the stages of rose plague. First commes the fever and the delirium. It kills most people up front, though a few manage to stay of execution - their fever ebbs, and they regain their strength, but their rash stays red, which means they can still pass the disease to others. Those are rosemarked, and they're banished from society until the fever reclaims them a few years later'. Zivah is an experienced healer, with a deep knowledge of the natural and animal world and the potions that can be made using this knowledge, that caught the incurable illness, while Dineas is a traumatized soldier. Both of them are together on a spying mission against an oppressive kingdom. One can read the story as a fairy tale packed with actions and noteworthy moments of suspense, but also with at least few human questions: how to treat those different, especially sick ones? how to cope with death and afterlife? what is the responsibility of (mis)using an acquired knowledge under harsh polistical and social conditions? (Zivah's standpoint was: 'I can use my skills only to heal, not to harm (...)')
The writing is flowing and you are instantly wired to the action, especially in the last part of the story. The sentences are build in such a dynamic way, packed with verbs, which creates a good page turning reading pace. And when you are at the end of the book, all you wanna know is what's next. Enough to move even the laziest readers among us.
Last but not least, the cover is an outstanding choice too, with its elegant full of fantasy design.

Rating: 5 stars
Disclaimer: Book offered by the publisher in exchange for an honest review
Posted by WildWritingLife at 30 December