An Icelandic Thriller Hard to Forget: The Legacy by Yrsa Sigurdardottir 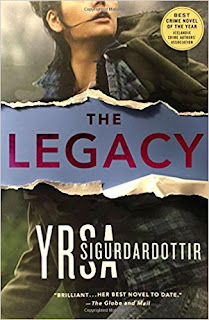 Besides the pure curiosity of my first meeting with a representative of the Icelandic literature - adding one more country to the list of my literary travels - and the plan of spending some hours in a company of a thriller that was well received by the professionist book reviewers, I did not know what to expect from The Legacy by Yrsa Sigurdardottir.
Tracing the crimes committed by an aparent psychopat targetting women without any aparent connection between each other, the thriller is more than a simple criminalistic investigation. It has that pinch of life which connects the crime story with the outside context of the society, and the more or less observations about the limited social contacts between neighbours and even between people belonging to the same families make it an interesting sociological evaluation in itself.
It is a very intense reading, where the psychopatic elaboration of the crimes intercedes with the mystery of an adoption mentioned at the beginning of the book and the question if there is any connection between those crimes and what the reader will easily guess as a terrible - blood soaked - secret.
There are many characters in this book, with more or less forefront role in the story, and the author succeeds to connect them in so many various ways that it almost looks like a puppet theatre very well coordinated. Most of the main characters, especially the children ones, are hard to forget and at least a couple of days after finishing the book I had them in my mind, as much as you can have a complex human being from the real life, thinking about the motivation or their psychological depth.
At the end of the story, each and every one piece of the domino is falling down to its place. And what and ending this story has! Completely unexpected and exactly how I like my thriller stories: unexpected, outrageously surprising and impossible to predict.

Posted by WildWritingLife at 25 May