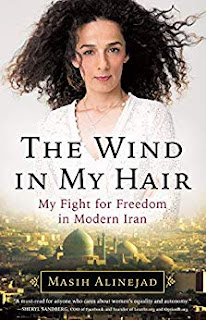 'In the Iranian Republic, being born a woman is like having a disability'.
Watching Masih Alinejad talking online about her fight for freedom in modern Iran and the everyday threats millions of Iranian women are facing with from the morality police doesn't let you indifferent. Even if you have no idea where to find the Islamic Republic of Iran on the map, you will be outraged by the situation of women because is simply unacceptable. The compulsory hijab change women into objects at the mercy of religious and conservative leaders and their instruments.
'My hair was part of my identity by your couldn't see it when I was growing up, my hair was no longer part of my body. It had been hijacked and replaced with a head scarf', said Masih.
Her memoir, The Wind in My Hair. My Fight for Freedom in Modern Iran, recounts her personal story, from her small countryside world until the halls of the Tehran's parliament and further on in London and NYC, as a feareless journalist ending up being banned from her country after disclosing the corruption and financial favors enjoyed by the Iranian MPs, in full despise of the struggle of the rest of the population.
Personally, I am familiar with Masih for a couple of years already, through her brave Facebook page My Stealthy Freedom, offering for the first time a space for Iranian women to show their opposition to the hijab laws. 'The women of Iran want to be free, to make their own choices', and Masih's activism gives strength and a voice to all those women having enough of being harassed and put to prison and lashed only because they are women. On Facebook, they dared to show their faces and especially one of the biggest enemies of the Islamic Republic: their hair.
However, I was not familiar with most of her activism back home in Iran, especially her journalistic activity, and the memoir retraces her entire career and her troubles with the authorities from a very early age. As a former political journalist myself, I recognized the fascination of building up a career identity in a world dominated by men but Masih got double portion of harassment, because she kept breaking rules in a dangerous and hostile world for women.
'The truth is that we need to create a free Iran. A country where people can freely choose. (...) I want an Iran that is democratic where women have equal right'. No other people than the people of Iran can push towards those changes. Especially the women of Iran.
Although I've found her stories fascinating and her enthusiasm and dedication to truth contagious, I've not always properly enjoyed the writing style, with way too much concentration of facts and names, but not too many personal observations that might put things into a wider perspective. The style sounds a bit dry and doesn't always flows from the literary point of view. But as a journalist, switching from daily reporting to memoir - and any other kind of non-journalistic writing in general - comes with the price of style in favor of the accuracy and attention paid to facts.
Masih Alinejad's book is a heartly recommendation to anyone curious about the challenges of women in Iran, at the end of which you might not only count more your many blessings of the freedoms as a woman, but also to be aware of your responsibility. As a woman who loves to travel, Iran is on the top of my favorite lists to visit. But in sign of respect for the women of Iran and many other reasons, I refuse to visit and be forced the compulsory hijab. Hopefully, one day, the people of Iran will decide to put an end to the nightmare and Masih Alinejad and many other people like her, can freely return to a free Iran.