Book Review: She´s Mine by A.A.Chaudhuri 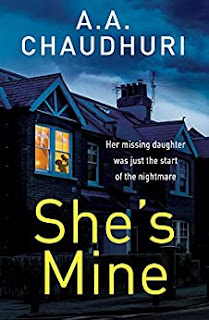 There are thriller books you can read at the pace of your mind, in a couple of days or maybe weeks, into bits, like a precious delicious cake you want to not spoil it´s uniqueness but having it all at once. But there are also books - not too many for my stuck to the order, over-organised being - that refuse to leave you alone until you deciphered the last bit of its mystery. She´s Mine by A.A.Chaudhuri  whose latest book, The Loyal Friend, I reviewed last week on my blog.

Told from the perspective of various intervenants, all part of the same story, She´s Mine is a story of betrayal, mind-games and dangerous efforts of playing Gods. It made me think how hard one´s revenge can go and why being honest and trustworthy is a personal responsibility. Playing nonchalantly with the trust other people invested in us - as friends, spouses, simple humans - opens up the darkest chambers of the soul leaving the army of evils to invade our mind. It´s a matter of personal choice to avoid doing it.

The sudden disappearance of her daughter Heidi destroyed Chrissy and her family for ever. Unable to bond with her other two children, born after the incident, the absent part of her marriage, trying to punish herself by over-exercising and self-inflicted eating limitations. She languished through life with no hope: both professionally and personally her life ended when Heidi disappeared. The promise of a new therapist that may bring her into a happier place made her forget her misery for a while. Until mysterious messages trying alluding to well-hidden secrets about an affair that haunted her for the rest of her life.

The plot so masterfully built piece by piece by A.A.Chaudhuri doesn´t leave you too much space to guess. Only your highest attention is required because every single element revealed is important for the next revelation. Every single page there are new hints offered that are about to confuse completely the timeline again and again. It´s an exercise of imagination and patience the readers is requested to practice and although I developped some vague ideas about the kidnapper, nothing prepared me for the details of the story.

Although all the details are almost perfectly falling together as in a game of cards, there were some details about Dr. Freya Cousins who for me were not fully credible, like for instance the fact that Chrissy could figure out about her persona while paying for her sessions.

But otherwise, She´s Mine is a pleasure for the lovers of psychological thrillers and after reading two of Chaudhuri´s books I am definitely joining her trustful readers who cannot wait until her new book is out on the market.

Posted by WildWritingLife at 05 July