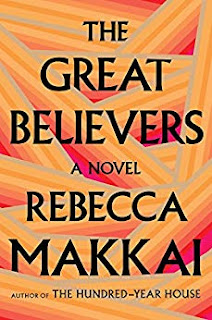 The Great Believers by Rebecca Makkai drives you through complicated and complex layers of recent history through memorable characters telling unfathomable stories.
The main characters are gay, dead or miraculously surviving the surge of AIDS epidemics at the end of the 1980s. They are Americans, from Chicago, close to the artist movement and at least some of them, ressenting the injustice of the establishment's incapacity to offer a proper institutional answer - not based on morality or religious lessons - to the medical crisis that dramatically affected the American society.
The stories are spread across two temporal slots: in the 1980s America and in 2015, in Paris. The constant presence of both times is Fiona, sister of one of the first in the community to be killed by the deadly virus. A faithful companion and helper to the other memers of the group that suffered the same fate, she is looking for her estranged daughter, that apparently found refuge here, after escaping a bizarre religious cult.
Although I personally found more than once that the stories are not always greatly built and at least for the 2015 period of time, are just stealing space from the initial plot, the construction of characters is what really makes The Great Believers a fantastic read. They have substance, personality, struggle and physical shape, everything made out of words. The book is also well researched, therefore the historical background creates a specific reality, and the artistic references are perfectly inviting the characters to come it to add their personal touch.
I've read it very slowly, sometimes with couple of days in between the reading sessions, becaue I wanted this book to continue. It opens up hearts and minds to a different reality and historical time frames, to intellectually charming characters. Probably the plot could have been more structured and from interviews with the author I understood that the final version was very far away from the first version of the book.  But there is a strength to create characters, with a touch of words as strong as it could be the hand of a painter on the canvas.