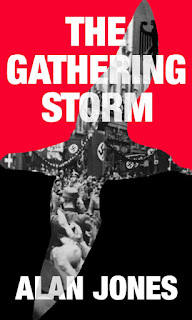 I am very careful with my selection of historical novels set in WWII, both as a reader and as a reviewer, but The Gathering Storm, by the Scottish author Alan Jones  was an inspired choice.

First and foremost, it´s a massive book: 800 pages that are decently packed with historical details and nonfiction information. Mostly based in Kiel, in the Northern part of Germany, The Gathering Storm - first from what the author calls Sturmtaucher Trilogy - follows the destiny of Nussbaums, a Jewish family, in the service of the Kästners, a family belonging to the highest military elites of a Germany who not only does not want to acknowledge his Jews but plans to completely annihilate them.

It is not an easy topic, both to think, read and write about. The past, in different re-readings and interpretations, still permeates, more or less aggressively, the present political discourse, in Germany and elsewhere. By outlining the story of a simple Jewish family, like many who strongly considered themselves rightfully part of the German nation, to end up murdered for the only reason of being born Jews, this book is a fictional testimony of the audacity of evil. But it also dilutes the danger of a black and white label and introduces characters with a consistence of their own, which may not give up in the face of the evil.

Based on five years of intensive research, the book creates a local ambiance both in the descriptions and the dialogues. Particularly the dialogue and the ´British Mandate of Palestine´-Germany exchange of letters are a good example of how a honest and genuine fictional approach can create a good story which follows a certain historical matrix while adding creative content to the various episodes created. Most probably it helps to be less involved emotionally and personally in a specific story.

I am very curious to read the rest of the trilogy as well, following the next war years, as well as the unfortunate course of events for the Jews in Germany and elsewhere. Especially for history fiction lovers, this book is a great read and despite the discouraging amount of pages for this first volume, reading it is really worth it.

Disclaimer: Book offered part of the book tour, but the opinions are, as usual, my own

Posted by WildWritingLife at 20 August