With the autumn season only a couple of weeks away and a winter around the corner, I need to be more careful finding more indoors events for my next weeks spent in Berlin. Fortunately for me, there are too many events around to go when the time is limited. The Literature Festival is close to the end today, but the Berlin art week is about to start this Tuesday, with a lot of happenings and events that I hope to attend and write about soon. Add to this some new concerts and comedies and theatres that are daily taking place in different corners of the city and you can have the landscape of a very busy cultural schedule in the German capital city. As long as there it is nothing else to do than run from an event to another, there is fine, otherwise, one can feel the deep frustration of too little time for really being everywhere. For this Sunday, I was inspired enough to book in time a reservation to a discussion with Salman Rushdie, at the Berliner Festspiele. As a long time admirer and reader of Rushdie's books, I was grateful to be able to attend the discussion, focused on his last book, Joseph Anton, a autobiographical novel I was familiar with from a chat with the author on Goodreads. 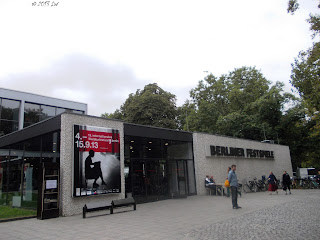 Even though I arrived 10 minutes before the start of the discussion, I did not have difficulties of going through the gates. After a couple of seconds check of my ticket, I was in the Festspiele hall, trying to find a place. At that level, there were only a couple of places left, but the first floor was offering a lot of options as well. I'd found a place finally. On my left, a lady was reading the German translation, while in the front of me, two ladies that met on the spot were worried about how difficult will be to understand the English discussion. Translation headphones were available free of charge as well. At 11.33, the doors closed and the participants arrived. 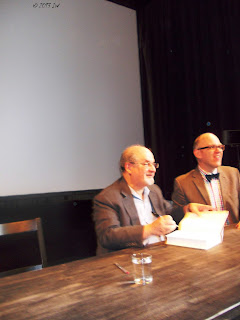 Held in a classical format, most of the discussion focused on reading excerpts from the English and German translation of Joseph Anton. There were no questions from the public, unfortunately, but during the marathon of book signing at the end, it was possible to ask one simple question, which I did, but more about that later.

Joseph Anton is the autobiographic novel of his years of hiding following the death sentence pronounced by ayatollah Khomeini shortly after the publication of the Satanic Verses, whose 25th anniversary is in 10 days time. He described the book as a 'non-fiction novel' that approaches real life events using fiction techniques to tell the story. Joseph Anton is the name hr used for his hidden identity: Joseph from Joseph Conrad, an artist of the hidden secret world, and Anton from Anton Chekhov, whose sadness and loneliness correspond to some of the stages Rushdie went through. His situation affected his family too, especially his son, around 9 years old at the time of the fatwa.
The book ends on the third person as he recognized that did not like too much to overuse the 1rd person. During his years of hiding, he kept a journal recording the facts he was coping with. Several times he was told to use the experiences to write a book about those years, but it took him a lot of time to realize that after 12 years he wanted to use another 2 years to write about what happened and another year to talk about it. However, after reading 'a lot of nonsense' about his own cases, he wanted 'to tell the truth about what really happened'. Rushdie wanted to go back to his life as a novelist, but he 'realized it is a good story to tell and did not want someone else to write it'. Repetition, especially in the era of Internet, magnifies and make things true despite the reality and he wanted to tell the truth. A special part of the story is occupied by the police officers that took care of his security during that terrible decade. Some of those appearing in the book are composite characters.
Although the official and political discussions around his case were often taken an accusatory note, as considering him the only responsible for that situation - 'you broke it, you fix it' kind of attitude, according to his words - and thus, not necessarily allowed to benefit of a full state support, despite being an UK citizen since the age of 14, his literary friends made 'a ring of steel around' him helping him to find new locations, among others.
Reading intensively and writing with talent does not guarantee a high level of morality, but such reasons are not enough for giving up reading and books in general. A conclusion similar with my own regarding the intellectuals in general. Being anti-intellectual is not the 'right' attitude when faced with the moral failures of some representatives of this world. Books and education empower each of us to react to the daily reality in different ways, but it is up to us to make the right choices.
Rushdie disclosed an interesting story about his family name. It was chosen by his father who praised the great Arab thinker Ibn Rashd, who in the 12th century faced a situation similar with his, being banned for years because his writing was considered subversive by the Arab Caliphate at the time.
Now, he is more free to move and inspired by Joseph Conrad is living his life despite everything. The book signing went on automatic pilot, and in less than one hour he left his signature on more than 100 books - including mine. I asked him if he is planning to write another travel book, besides the Jaguar Smile, his early account of a trip to Nicaragua, but he reassured me with a 'maybe'.
I have now a long list of his books to be read, so maybe till his next novel, I will be done already.
Again, I am enormously grateful to be in a city where so many things are going on! The today discussion with Salman Rushdie was another reminder of how lucky I am.

Posted by WildWritingLife at 15 September