Back on the Family Memory Lane: Algeria is beautiful like America 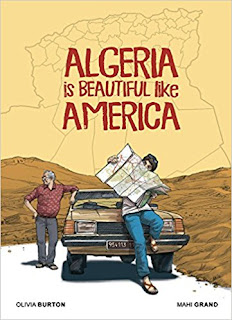 'Where you don't know where you're going, take a look at where you come from', goes an Arab saying. Young Olivia is going back in the country of her ancestors, looking to re-create personal histories and memories, mostly left to her through her grand-mother's stories.
Former 'pied-noir'/'black foot', name given to Jews and Christians who at the beginning of the 20th century 'colonised' Algeria and other North-African countries from France, Olivia's family left the country in the 1960s with a piece of the country in their soul. They left there the best memories and a life lost for ever. Memory is treacherous, adding layers and layers of nostalgia the reality that was maybe completely different. Olivia is inspired by those filtered memories and her journey is both a self-search of her family roots and a travel dairy in a country still wearing the stigma of the bloody civil war in the 1960s.
Telling the story as a graphic novel was a very inspiring way as it offers a proper visual content, but also creates different memoir dynamics, with its own red line of events and encounters, that maybe if told in a classical way would have been less entertaining and interesting. Qualifying this genre as less-literary ignores from non-literary snobbish reasons the rich values that the match between inspiring words and inspiring drawings can bring.
Algeria is Beautiful Like America is a good example in this respect. Especially when you have to deal with historically delicate topics, graphic novels may bring a pinch of irony into the story, which can deter the otherwise dangerous time bombs of political and ideological discourses.

Rating: 5 stars
Disclaimer: Book offered by the publisher in exchange for an honest review
Posted by WildWritingLife at 25 March