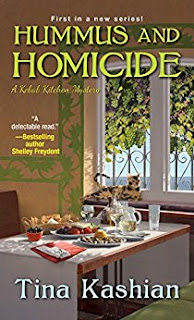 A cozy mystery with a lot of tasty references to the greatly unknown Armenian cuisine, Hummus and Homicide by Tina Kashian keeps you interested despite the slow pace. The story is populated with characters with strong personalities and promises a series which local American countryside flavor and ethnic cuisine mysteries.
When the most antipathic character is found dead in the parking place, you may not feel any regrets and remorse for feeling so, but her death may put under question the future of the Kebab Kitchen, an Armenian restaurant. 'A murder in Ocean Crest is big news', especially when it happens for the first time in at least 40 years. From now on, nothing is as simple as the uneventful life of the Ocean Creast residents. It happens that the death of the freshly sanitary inspector Heather Bank occurs after she ate at the hummus bar from the Kebab Kitchen, being served by Lucy Berberian, the daughter of the Armenian couple running the restaurant, recently back for a sabbatical after years of hard work but no right reward as a patent lawyer. The fact that Heather and Lucy did have old disputes from the school years, and only a couple of days ago their disagreements reignited in a public space, which means everyone around may know about it, places Lucy in the first line of suspects.
Lucy doesn't give up and without waiting as the good citizen the results of the police investigations, she starts her own research leading to the spectacular discovery of the real murder, who before being delivered to the police, is stopped from comitting a new victim by being hit between his eyes with a jar of tahini. As foodie as that!
Although the pace of the investigation is relatively slow, the details leading to the final revelation are parcimoniously yet spectacularly outlined. There are plenty of characters in the book, enough well defined to be loved or hated by the reader. As for the tasty mouth-watering descriptions, it just makes me run to check the first Armenian restaurant. Anyway, I didn't know that hummus, for instance, is part of this cuisine.
Overall, a pleasant read for a relaxed weekend. I am personally looking forward to the next installment in the series, as I am already curious about what will happen with some of the characters I've got acquainted with.

Rating: 4 stars
Disclaimer: Book offered by the publisher in exchange for an honest review
Posted by WildWritingLife at 10 March