The Russians are back...in literature 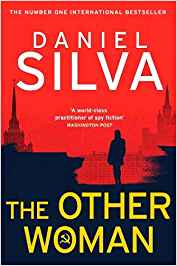 The Russians are back...in the spy books and that's the only good news of the old/new chaotic geopolitical realities. After a short post-Cold War intermezzo when spy stories were terribly boring, with characters that were rather impersonations of peace workers than fierce fighters for the security and safety of their own countries - or sometimes other countries' too - Daniel Silva brought the typical KGB/SVR/FSB etc. operatives infiltrated in the heart of the Western democracies.
Silva's latest novel The Other Woman is ingenious in construction, with a hint of romance, but well tempered and using patterns common to the Cold War novels, but who still goldies.
Rebecca Manning, the secret daughter of the famous Soviet mole in the heart of the British intelligence Kim Philby, is back to revenge and finish the work his father started: destroy the West and NATO, among others. As the MI6 head of mission in Washington - like her infamous father - she is one step further of leading the service sooner than later. Until the Israeli - lead by the famous Silva's character Gabriel Alon - are entering into the picture and cut the story short.
Compared to other novels by Silva, the action is rather limited to a historical diorama of facts and events that mostly took place into the past, while the ongoing race of encounters is moderately slow paced. Which brings a lot of background into the picture, not necessarily familiar to the contemporary reader, but which makes a suspense story into itself. As usual, Silva uses a lot of interesting and realistic details that pertain to the everyday realities in both Europe and the Middle East creating the fitting context for the novel plot.
The ways in which the plot is created and written and the story in itself makes it a great spy story with some old times' charm. This is the only reason it is good to be back, on firm ground.

Posted by WildWritingLife at 22 March