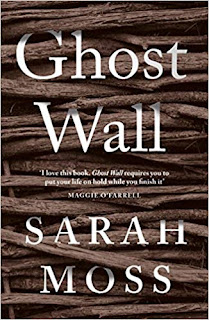 As a historian specialized in deconstructing historical myths, I've find historical appropriation at least as toxic than the cultural appropriation. The (mis)use of cultural symbols for another culture can easily pervert the original meaning eventually for further insertion into a propaganda narrative. Historical appropriation monopolizes and idealizes the meaning of past epochs and events, projecting them into the contemporary context as a ideal reference. An ideal past versus the imperfect and failed present is aimed at creating a perfect reiteration goal. The simple incentive is to change the present until it corresponds to the subjective representation of a past that lies in a completely different and mostly misunderstanded time cluster.
In the beautifully written (the nature descriptions are so poetic and breathing tension) Ghost Wall, a small community of history hobby lovers coordinated by a Professor are spending two weeks living as in the Iron Ages in the English countryside. An England obsessed by race purity and the proclaimed right to isolationism, as Brexit showed it. Silvie's father, a bus driver obsessed by Iron Ages, who forced his family to live as 'it used to be' - an expression often heard among those who believe in a better past. Ironically, for his everyday life he still drives a bus and uses money to purchase goods, but historical appropriation usually operates on a selective basis. You keep living in the present, while picking up from the 'perfect past' those elements, mostly of spiritual nature, which are glued to the everyday life. The result is a kitsch and it doesn't change at all either the very nature of time or of the humans pushing forward for the reiteration.
The push towards recreating a paradise-like world is an everyday nightmare for Silvie, who's acknowledging not only the imperfections and inaccuracies of what his father chose, but will be the direct cruel victim of a historical reenactment.
In times when the calls for a return to an ideal yet inadequate past are more strident than ever, the reflection on such facts, expanded at the length at the novella is more than welcomed. Books like Ghost Wall fills the wide intellectual void that is not yet prepare to tackle seriously the reality.
The story has outbursts of tensionate episode that are crisscrossing the relatively descriptive and slow chain of events. What disappointed me was the relatively bland ending, clearly not at the same level of intensity and expectations with the rest of the story.