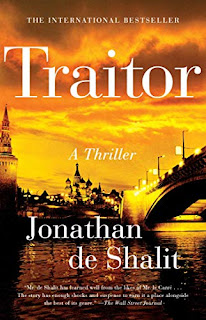 'Just like a frog in a pot gets used to water that's boiled slowly, the frog will allow itself to be cooked alive without even considering the option of jumping out of the boiling water'.
Jonathan de Shalit - a pen name and he might be a she as well- created quite a sensation in the world of thriller readers and writers. Described as a 'former high-ranking member of the Israel intelligence community', his books - 2 by now - are reviewed by a governmental committee in order to be sure that his literary endeavours are not offering open information about state secrets and operations. This short presentation only guarantees that touch of glamour that will make his books automatically interesting for the lovers of thrillers and spy novels.
Influenced by John le Carré - that he translated into Hebrew - and Somerset Maugham - both authors with a previous experience in the intelligence field - de Shalit introduced in Traitor a post-Cold War world where old secrets are out in the air - shared by old women at the end of their lives with nothing to lose. Under the codename 'Cobra', a high-ranking official in the Israeli establishment trade secrets to - what he thought - Americans. In fact, he was a poor pawn used first by the East-German intelligence - STASI - and thereafter directly by their de-facto masters from Moscow - KGB/FSB. Mossad is now searching for the mole after a friendly exchange of information from their German colleagues.
A special unit is created which in just a couple of days is able to trace - through stories of love and deception - that person that willingly offered himself to betray, in exchange of power and money, without being fully aware with whom actually it is dealing.
Maybe it was the censorship or some writing choice, but the slight imbalance between the literary part of the story and the 'technical'/'operational' made the reading more than once a bit uninteresting. Explaining the reasons why someone betrays and the fact that intelligence agencies, all of them make mistakes, took too much impetus from the writing itself and the story is relatively affected by this clumsiness. The intricated game of betrayal is in itself a fascinated topic that was not extensively exploited from a literary point of view. I've also found that some of the characters are in fact extremely forgetful and make mistakes too easy to be made by someone labelled as belonging to an 'intelligence' community - including in their sexual/love choices.
However, book is a good Cold War thriller, although the influence of Le Carré - which I personally cannot digest at all - it's too predominant. I have on my Kindle already the other book of 'Jonathan de Shalit' and would be curious to explore it. If you love spy thrillers and old West vs. the rest stories, it is a good recommendation. You can read it fast and in one sitting. But don't expect too much action or fantastic and unexpected page turning adventures.

Rating: 3 stars
Posted by WildWritingLife at 27 May