Dismantling the Culture of Sexual Predators 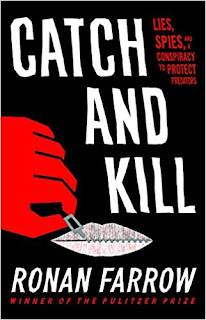 I know the media well, I have friends in show biz in more than one country and I am aware of some gossips in the academia as well. There might be a couple of things to say about some religious institutions too. You know, those kind of information about who is a predator, with whom, and for how long. The kind of man you better stay away of. Men with power, influence, money, a smiling wife and children at home. Some are sick, some are simply taking advantage of their position and social status. No one challenges their habits as they might get the argument of the old 'tolerant' school of attitude towards women. Like it is acceptable to aggressively flirt with the women in their office, as long as they come at work well dressed and wearing make up, isn't it?
Does this excuse rape and traumatic sexual abuses, committed against victims whose silence is sealed by NDAs and 6-7-digit 'compensations'?
While reading the excellent research and journalistic investigation by Ronan Farrow Catch and Kill. Lies, Spies, Conspiracy to Protect Predators, I had in the front of my eyes more than one  familiar case of both predator and victim. While when judging the predator many just preferred to invoke his status the victims are often judged as 'weak', 'indecent', having that 'something' that may provoke a certain reaction in men.
This is the culture that allowed the behaviors of Harvey Weinstein, Jeffrey Epstein and Donald Trump. Let's not forget Bill Clinton either. Weinstein's predation was 'enmeshed with his professional life'. His system involved powerful attorneys, media friends and experienced investigators (like the famous - for all the wrong reasons -  'creative intelligence'-driven Israeli company Black Cube).
On the other side, the women themselves rarely received support from their fathers and partners in revealing the truth. Many simply gave up 'and then they feel like it's their fault'. The system is aptly    described by Farrow as 'a network news culture that made women uncomfortable and unsafe, and left little room for accountability around its larger than life stars'.
Brave journalistic investigations as those done by Farrow, who took the risk to go on with his researches despite the tremendous personal and professional pressures he was subject too - which included among others surveillance and phone tracking - are sealing the end of the culture of silence. It's about time for people like Weinstein and the likes to understand that their time will be soon over.
Catch and Kill is excellent also because it gives a chance to serious investigative journalism, in an era of easy readings and futility. There are still fierce journalists around that will not leave in peace the predators and their minions.