Memoir about a Country that Doesn't Exist 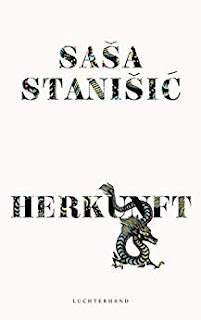 Sasa Stanisic was born in Yugoslavia. A country that doesn't exist any more. Few people remember about it and even fewer will know that it ever existed. Born from a Bosniak mother and a Serbian father, Stanisic and his family refugiated to Germany, where he is currently living, reading and writing.
Herkunft - written in German, which means in a very simplistic translation Origin - is a memoir about life in a country that does not exist anymore. A country that was destroyed by identity wars, leaving behind thousands of dead and refugees spread all over the world. A genocide was perpetrated in Europe, the old good Europe, that again was unable to take any decent moral and military action.  Maybe because some of its public intellectuals were too busy taking the sides of the Serbian criminals, among them Peter Handke, one of the recipient of this year's Nobel laureate for literature - with whom Stanisic personally started an online war to no avail, as it seems in Stockholm it takes a long time to grasp such serious information.
I've read before How the Soldier Repairs the Gramophone has the right absurd humour and touch that relates to the biggest absurd war game that was played in the ex-Yugoslavia. Herkunft is more realistic and cruel in a journalistic kind of way. No regrets and tears, but disparate memories of him and his close families put together. There are small such unique stories creating the memory thread, which is subjective and not necessarily coherent, but it makes the story of origin. It is like a tree of life we fill in with life stories.
I often read memoirs and I love this genre but Herkunft is by far one of the most beautiful I've read in a while. Also because at a great extent it resonates with stories and memories that I've gathered myself as a journalist from this unique realm.
In an era when we forget so fast what happened not long ago in the heart of Europe, Stanisic reminds a neglected narrative. The more we know about it, the more Handke's distorsion of truth is revealed in its ugly nakedness.