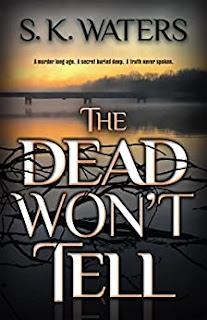 Abbie Adams, searching for an answer, although aware she may advance her investigations under the shadow of a killer. And an unexpected discovery that one beloved teacher, no other than her faculty advisor, may be connected to the criminal. S.K. Waters created in The Dead Won´t Tell a perfect small town mystery, by using spectacular twists happily integrated into the cozy ambiance of a local crime investigation. I particularly loved how Adams is using her both historian and journalist skills in order to spot the criminal. Curious as usual about writing tips from successful authors, I´ve reached out for Q&A featuring exactly those details that mostly remain untold and unknown to the reader.

Before writing mystery, fantasy and a little in between, S.K.Waters was a technical writer, database admministrator and a championship quilter.

Many thanks to Andrea Kiliany Thatcher from Smith Publishing for the opportunity.

Question: What makes The Dead Won’t Tell different than other mysteries?

S.K. Waters: Oh boy… Well first, Hunts Landing is more than a setting,it’s almost a character in itself. The book shares a lot with cozy mysteries, but it is grittier. The cast of characters are based on real people I know from living in the Deep South since 1998.

Question: Why did you want to set your story in a small town?

S.K. Waters: I found myself living in a small town in North Alabama and at first I thought I was going to be bored out of my mind. Not too many restaurants, for example, and a lot of them were closed on Sundays. Over time, though, I found the small-town dynamic fascinating, at least in the one I lived in. Many families I came to know had lived there for generations, and knew each other’s stories and who-had married-whom and who had a still in their garage. I didn’t necessarily become people watcher as much as a people listener, because they told such good stories.

In the book, Hunts Landing is a combination of three towns in north Alabama: Huntsville, Decatur, and Athens. Huntsville is where the German rocket scientists where brought after WW2 and they developed the rocket systems for the Apollo missions. The Square in Hunts Landing is based off the square in Athens. And Decatur brings texture to the town (and has some of the best antique stores around, FYI).

Question: What makes the relationships in The Dead Won’t Tell so special?

S.K.Waters: Family doesn’t always mean blood relations. In The Dead Won’t Tell, Abbie is a widowed mother raising two kids by herself. Yet many of the main characters (Loreen, Joss, Madeleine, Jethro) become Abbie’s family, they worry and care for each other and sometimes even fight, just like in a real family.

Posted by WildWritingLife at 14 September