A different perspective on Mata Hari 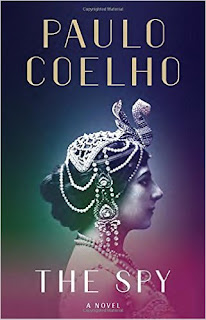 The controversial and exotic story of the spy woman Mata Hari remains a fascination for those interested in conspiracies and secret histories. Based on recent documents released by MI5 and German intelligence, the newest novel by Paulo Coehlo is changing the angle regarding the codename H21. 'I am a woma who was born at the wrong time and nothing can be done to fix this', seems to be the motto underlying the story.
Using different time frames and voices, including Mata Hari's, the different aspects of her personality - less of her apparently irrelevant intelligence activity - are revealed. She is portrayed as an independent woman faced with difficult choices, free - 'Though at the moment I am a prisoner, my spirit remains free'. This freedom seemed to overpass love, contrary to the usual love story and heartbreaking associated with her. 'Because that's what I always sought: freedom. I did not seek love, though it has come and go. Because of love, I have done things, things I shouldn't have, and traveled to places where people were lying in wait for me'.
Escaping an abusive marriage and following a forced sexual relationship with one of her teachers during her school years, Mata Hari completely reinvented herself as a do-it-yourself hobby Javanese dancer and mesmerized Europe, particularly France, with her charms and innovative Orientalism. 'I decided to be what I always dreamed. And the price of a dream is always high'.
But she is caught in the WWI circle of events and may accept to be part of some spy-related opportunities, both for France and Germany, by using her extensive network of acquaintances, admirers and lovers. Her freedom to move between countries and worlds is closing to the fatal end as she will be arrested and send to prison, and condemned without clemency to death. Although concerned about the gravity of her situation, she moves through facts as a bird, somehow before ever touching wings to the ground. This is probably something rarely expected from a fatal woman and also a trained spy.
In the book, there are often made comparisons between her case - condemnation without appeal - and that of Cpt. Dreyfus, outlining the lack of popular demands and intellectual debate regarding her case. As a woman, she is a victim of justice and machinations and will go straight forward to the last steps towards execution.
I've found the writing a bit cautious, a fine balance between the need to cover properly historical facts and the need to let the imagination fly and create a literary work. Otherwise, it is an interesting approach and another work part of the literary works I had the opportunity to read this year dedicated to free women.
Rating: 4 stars
Disclaimer: Book offered by the publisher in exchange for an honest review

Posted by WildWritingLife at 28 November