Your Fathers, where are They?... 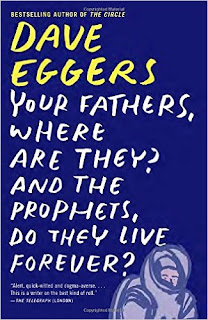 A cosmonaut, a former congressman, followed by a teacher, policeman, nurse are kidnapped and brought for interrogations in a disaffected military base by a mentally unstable 30 something guy. He also brings here his own mother and a girl that he met on the beach and he believes is the woman of her dreams.
His questions are simple, about why and where his life is headed to, why some people succeeds and other not, why his Vietnamese friend was killed, why a famous and motivated cosmonaut cannot achieve his dream of walking in space due to budget restrictions. It is chaos in his mind and darkness and sudden outbursts of 'prophetic' light.
'No one had a plan for anything. I guess that's the crushing thing, the thing that drives us all crazy. We all think there must be someone very smart at the controls, spending the money, making plans for our schools, parks, everything (...) No one has a fucking clue'. This is the post-apocalyptic Cold War America, out of itself, running naked and unable to stop or head somewhere sure. Thomas - the main character - doesn't put everything under question, but need to find a person available to answer his questions. He is not going online to ask Google, but has his plan. Just kidnap for a while some people that might have the answer, keep them hidden - without molesting then, bring together some pieces of the puzzle and move forward with his life, running away.
Did America fail, do people fail to be human, ending up doing what they were told and not going anywhere? Does Thomas solve the riddle of his life?
It is an absurd play, with absurd outcome and sickness-pathological curiosity. Thomas is maybe the victim of the overwhelming impact of the everyday politics on the daily lives whose enormous pressure could make the everyday life unbearable. He wants to hold someone accountable for the mess, but it is no Gd either.
Many of the arguments were not so or not at all appealing to me, hence the three star rating of this book. What I really loved enormously was the art of dialogue, a perfect point-counterpoint way of asking, with fantastic smart twists that keep you interested and your brain awake. An excellent inspiration for writers and a pleasure for the reader!
Rating: 3 stars
Posted by WildWritingLife at 20 December