An interesting YA novel: Going over, by Beth Kephart 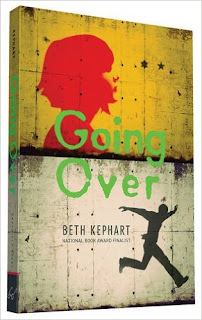 With a story set on the both sides of the Berlin Wall at the beginning of the 1980s, this YA novel with a historical touch is unique for its approach and deep understanding of humans caught into the intricacies of history and histories.
Ada is a teenage girl whose hair colour is constantly changing, living in a community of hippies and punkers, working with the Turkish women from Köttbuser Tor (Köti for the usual Berliners) in the Western side of the city. Stefan is 18, spying with his telescope from Friedrichshain - 'Because no one can stop us from looking' and planning the escape to freedom. They both knew through their grandmothers, good friends sharing the memories of the WWII aftermath.
Stefan, as some of the Turkish people working in West Berlin, are in the wrong place, but he, he is still free to make the right choice and escape his place of destiny. The little Savas and his mother from Köti can't and they will be the victim of a tyrannical father unable to accept their humanity and refusal to obey his orders. In mirror, the two dictatorships are reflected, with Ada and her friend being the intermediate chains to freedom.
The time line is going back and forth to explain events and create the general context, starting with the moments when the two grandmothers were sharing the same country and the post-war traumas. The general mood is nostalgic. Until the very end of the story - which ends with Stefan's attempt to land on the other side of the wall - the readers are turning fast the pages in order to know what will happen next. It is hard to guess and although the book is more focused on feelings and inner changes than loads of action, it keeps you curious.
It is an interesting book, brilliantly using a complicate historical context for telling a story of young love. One of the best in this category I've ever read.