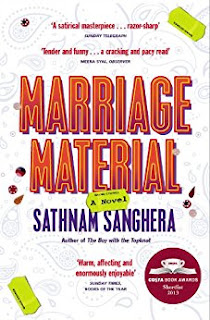 The intricacies of rules and religious and traditional interdictions may create a lot of frustrations and the impulse to struggle hard against, but it also can be an illimited source of literary inspiration. Dealing with identity challenges of first generation of immigrants of Sikh from Punjab to England, Marriage Material by Sathnam Sanghera is actually offering voice to more than one specific community.
The language limitations of individuals living in a country without actually connecting with other community than the one of their own, the desire to have outperforming children - preferably doctors or lawyers - whose studies are paid hard from their small - often ethnically-oriented - business, the religious reliance of traditional food chore identity issue or the intensive matchmaking is not only the priviledge of Sikhs, but it can be often encountered to almost any close-knitted community. This is the background of the story, against which people die, drink, smoke or try to find their way out of the community.
Ironically and with a well-deserved pintch of sarcasm, Sanghera created a story which uses the dilemma and challenges of a mysterious Sikh community. Personally, I didn't know too much about them except the turban issues and some few other lines about political stances in India and alcohol interdiction - although the realities of booze consumption may be a bit different. However, all the restrictions governing the everyday life and social relationships rang a bell from different non-Sikh story.
The struggle between free choice of the new world and tradition of the family world creates the main tension lines of the story, that aren't necessarily solved but lived by and creatively developped to live by. At different periods of time, Arjan and his aunt are making the same step outside the community, by marrying out of the group, but still remaining closely knit - at least sentimentally, with the 'home'. Because, even in the most radical cases of going 'off the path', there is a sparkle that still keeps you there and it is very important how you can go beyond the resentment for coming at peace with your past and yourself.
In inter-racial, or inter-religious relationships there is at least one moment when one side or the other or both will realize their longing for 'a relationship which didn't require the constant explanation of cultural differences'. But when you want to be part of the big group - at least aiming at reaching the same social and political status with the majority - the desire to leave your traditions behind may enroll you in the same camp with racists and people accusing your group of not being integrated or grateful enough for the priviledges granted by the 'new country'.
Even after two generations and a couple of mixed marriages away, the struggle never ends in fact. For the literary world, it is a good news, as there will be always in stock interesting books dealing with identity dilemma for many years from now. Readers like me will keep looking for them because you always long for a taste of home, regardless what is the name of that home.