February it it the season of love - it sounds a bit stereotypical as love should be here to stay all round the year. Anyway, at least once the year, if not each and every one of the 365 days, it is about time to remember and think more about love and its challenges. Even only at a literary level.
In the honor of Valentine's Day, I had the pleasure to be invited by Priya from Writerly Yours to be part of a dedicated blog tour focused on the Regency novel by Emily Murdoch, A Valentine Secret. For me, it was my first Regency novel and the decision to be part of this new bookish adventure was also motivated by my curiosity to find out directly about this special genre. The literary experience was pleasant and stirred my interest for more such works. Using as background the British society in the 19th century, Regency novels are basically focused on love stories, many of them of the impossible kind, with social barriers and class differences the main impediment to love. It might sound unfair or unacceptable for our 21st century eyes and ears, but such situations, even though without the same intensity and drama and frequency, might happen in our illuminated times too.
Emily Murdoch is a medieval historian and writer with large experience in the field of media, art and museums, a background that explains the interesting approaches and topics of her books. 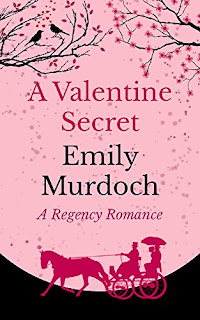 Visiting from Oxford where he was enrolled as a student, Jonathan, the descendant of a noble heritage, falls in love with the modest Penelope, the adopted daughter of Mr. Baldwin, the owner of the florist shop from the village of Maplebridge. From the very beginning of the story, there are secret meanings to be discovered in the story. As in life. This fragment of dialogue between Mr. Baldwin and Jonathan can be considered revelatory for the direction of the story: 'Young Sir, there is not a single flower or plant in this world that does not have its own specian meaning, if you know what you are looking for'.
Although a familiar of the florist shop, Jonathan ignored the presence of Penelope that he is calling now 'the most unparallel beauty in England', caught between the glass walls of his social class and distant world. Impetuos and straight forward, he is inviting her and his family to dinner to his home, creating a serious faith with his conservative father - 'She is no one! These Baldwins, they are not of our social standing, Jonathan, and you know this!'. Even though belonging to the high-class, the noble father is behaving rudely in the presence of the guests. with the only effect of only increasing the pride and ambition of his son to continue the girl's courtship.
The book is a short read, but relatively fast paced emotionally - including some roller-coaster episodes - and with some nice turn of events - including on the father side. I particularly loved the dialogues and the ways in which beneath the pretentious exchanges, normal feelings and ideas were elegantly hidden. Another plus of the book is the reality of the characters: you can see and feel and be with them, from the very beginning of the story, which encourages the reader to follow their journey.
I strongly recommend this book to anyone interested in a good written romance that raises questions about love and trust and the artificial limits to finding real and genuine love.

Rating:  4 stars
Disclaimer: Book offered by the author in exchange for an honest review
Posted by WildWritingLife at 21 February