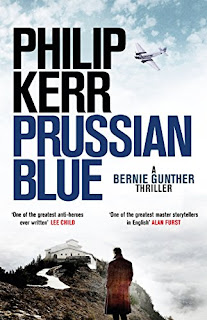 A political thriller with a German background, going back and forth between 1956 and 1939, Prussian Blue is a dense book with interesting dialogues and an overdose of history.
The 12th installment of Bernie Gunther mysteries, a policeman trying to remain honest in the Nazi Germany without being a party member, the books brings into the story various episodes from the contemporary history, shortly before the start if WWII and during the Cold War. As the story advances, there are some similarities in the structure of the narrative which does not limit the development of the events.
The investigation requested from Gunther into a crime committed in the 1930s against a relatively low level bureaucrat at Berghof, the dictator's headquarters in the South of Germany brough to life the extent of corruption within the party's leadership. Characters from that time are coming back to life under different uniforms in the Stasi-dominated Communist Germany asking Gunther, refugiated after the war at the French Riviera, to poison a British pawn considered disposable. While trying to escape this task, and his Stasi followers, Gunther remembers his assignment in the South of Germany, where he went through the dangerous beehive of the Nazis. Both stories do have an ending hard to predict, but as the detective is getting closer to the truth, the life is becoming more and more dangerous.
I personally was a bit disappointed by the ending, but it could also be that the dialogues and the writing in general are so captivating that you can hardly want the story to end, regardless of the ending.
A recommended read to anyone interested to read a good thriller with a solid history background and interesting legal twists.

Rating: 4 stars
Disclaimer: Book offered by the publisher in exchange for an honest review
Posted by WildWritingLife at 17 June