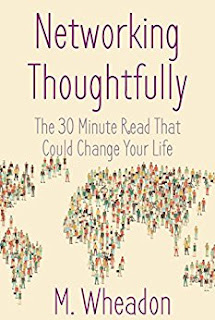 Networking is almost everything nowadays. We need to know how to do it correctly for work or for a better, inter-connected life. But are we sure we are doing it properly? In the last years, plenty of books were published aimed to help a better and thoughtfully networking. As an intensive social media user, I am always happy to read and introduce to my readers new ideas and books. M. Wheadon is the author of a recent book aimed to offer fast assistance for an efficient networking. He was kind enough to share his impressions as an author with my readers in the following interview:

- What does it mean for you, *networking thoughtfully'?
It means networking with the other person in mind: changing the emphasis from what can I offer you to what is it you want, and then seeing if you can satisfy that need.
- Does networking work for any domain of activity, for instance mathematics or engineering, domains by excellence confined to the silent world of the lab or research?
Networking only works when people want to network. If people genuinely want to find out what others are doing and if you genuinely want to help them, then networking works in any sphere. It concentrates your mind into fully understanding what your product offers, but integral with that must be a desire what the other party needs, so there can be a successful dovetail of information.
- What are the risks of a not-networking attitude, both personally and professionally?
To me, I think it just means you don't broaden your horizons as well as you could. By networking, you can understand trend, foresee patterns and get an in depth understanding of the market in which you operate - the swapping of stories. It's not all about selling product, it's about learning your industry and learning about the marketplace in general.
- What is, in your opinion, the percentage played by networking in the success of a business?
I think we are networking 100% of the time. Whatever we do, whatever we say and how we do it, is in some respect networking.
- What was the biggest challenge for you of writing this book?
Overcoming the fear that nobody would buy it. But, I knew that whilst it is not a huge book, it genuinely contains tips that worked for me and, therefore, I thought it was worthwhile putting it out there in the public domain.
- What are your next writing plans?
None. I wrote the book a little while ago but tragically my wife died of cancer and it was inappropriate to market the book. Since then, I've left the world of banking and don't think I have anything else to offer on that subject. But, as your question has prompted me to think, there may be a book called Pastoral Caring Thoughtfully, building upon my experiences as a minister of religion.

Photo: Archives of the author
Posted by WildWritingLife at 22 June