A Captivating Middle-Grade Novel: The Elephant Thief by Jane Kerr 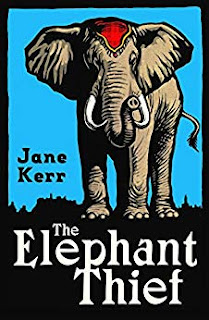 Based on real facts that took place in the 19th century, The Elephant Thief is also a beautiful story of friendship between the elephant Maharajah and the pickpocket Danny. From the slums of Edinburgh until Manchester, he will be part of a race against all odds to save a menagerie and gentlemen's honour.
Slow paced yet not missing adventures and page turning events, this middle grade book has an elaborated plot which reminds a bit of the Dickensian novels about children from unpriviledged environment, faced from an early age with the hardship of outlaw adulthood. The writing is simple, accessible for the mindset and reading habits of a child outlining though creating an easy to grasp authentic historical ambiance.
There is a big array of characters appearing more or less suddently in this story, often with doubtful intentions and problematic character features. The human mosaique as portrayed in The Elephant Thief is really diverse and complex and a challenge for a mid-grade child although it offers a good knowledge about the human diversity in itself, regardless of the historical location of the story. Personally, I've learn a lot about human nature while reading at the same age the novels of Balzac and Dickens, both outstanding artists of humanity with all its lows and highs.
In addition to the human story, there is another part of the story which is highly sensitive and well done from the literary point of view: the wordless communication between Danny and the elephant Maharajah and the deep connection built in a relatively short time between the two of them.
Although not the audience target of this book, I've found it highly enjoyable and the smart writing makes it a good reading choice for everyone. The way in which historical facts were researched and used further for creating a good story that stands the test of time is an example of how far you can go when you do your historical homeworks while filling the episode with quality writing.