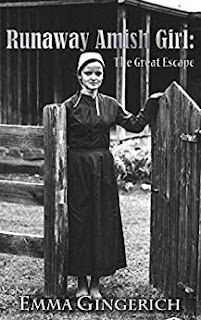 I am personally fascinated by Mennonite/Amish stories, as I am curious about the possibilities of surviving as a very recluse community in a world which is very fast moving forward. As the members of the communities themselves are closed and without access to modern tools - Internet, edition houses - to share their stories, the information about everyday life are predominantly coming from people that leaved the fold.
Runaway Amish Girl: The Great Escape, by Emma Gingerich is such a story. Growing up in what she described as the 'group of the least modern and uneducated Amish people on the planet' - the Swartzentruber Amish a group created following a split from the mainstream at the beginning of the 20th century - she decided to run away from her Missouri community finding her own path as an educated, modern free woman. Speaking mostly a local German dialect, with a very restricted use of technology use and refusing to accept hot water or plumbing into the house, the Swartzentrubers (named after a religious leader) look indeed very reclused and my later documentation about them outlines their insularity among other Amish groups that they refuse to mix or inter-marry with. What for me was extremely awkward was the description of some of their dating habits sleeping and hugging together in a bed while fully clothed.
Once away, Emma is having a lot of challenges understanding the modern world, not only from the technological point of view, but also in understanding human relationships and intentions. Some of her tragic episodes reminded me of accounts shared by Leah Vincent in her excellent memoir Cut Me Loose, of leaving the strictly religious Jewish life. The transition is never easy and time will only help to alleviate the pains of the cultural shock.
The story in itself has a certain anthropological and cultural value but when it comes to the literary aspects, the shortcomings are evident and bothering sometimes. The style is linear and lacks any literary appeal, mostly following the memory lane, without too many serious personal insights from the author. The story is simple, predictable and self-focused, which makes it into a healing confession but with a very limited literary value.
My interest for reliable interesting reliable Amish stories will continue, as it helps to put many things into the right cultural and history of religions' perspective.