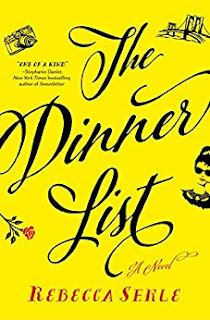 The Dinner List by Rebecca Serle is the second book in less than one week that I wish I liked, give it 5 star and heartly recommend to other people. The writing is gentle, emotional and connecting the dots between characters, but I couldn't heart the idea itself - of bringing together at a birthday dinner dead and alive people, among them Audrey Hepburn.
The love story between Tobias and Sabrina - the main character at whose birthday party the people are invited to - although a typical young relationship, with all the innocence given by age - is by far one of the most beautiful I've read lately. Sabrina's struggle to reconciliate with her now dead father who left her when she was a little girl is also worth a literary mention. The writing flows and the intertwinning of the temporal streams iswell-braided.
However, as much as I tried, every couple of pages at a time, I couldn't stand the idea. It was not because I might not like magic realism or because my imagination is limited. All the time, I felt that it is such a good story told in the completely wrong context. Therefore, I was left with the strong impressions about character looking for connection that ended up in a spiritist-kind of session. I also wished that Audrey Hepburn was not on the list - among the possible guests, there was also Plato - only because it become such a omnipresent character, with all its kitschy downsides of such an overuse and often abuse of the brand.
I would definitely read something else by Rebecca Serle as I was won over by her writing style. However, I wish for myself there is a different spin of the story.