About The Art of Leaving... 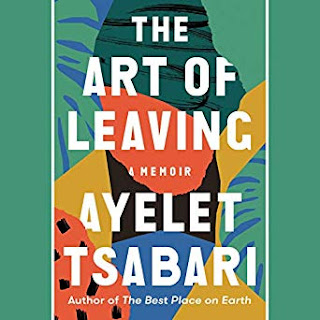 The art of leaving...it's such a fine and complex and hard to acquire art. You need to go through the (almost) daily experience of the hard school of life and loss to know how to fight against the gravitation laws of staying. You learn to fly through people and encounters and hands up in the air trying to hold you but still you go...because life proved you over and over again that's safer for your lightness of being to run. Sooner or later you will be left again, so better be always ready.
I got prepared to read The Art of Leaving by Ayelet Tsabari by The Best Place on Earth, a collection of short stories using the complex often conflictual framework of the Israeli society to bring to life unique strong personalities and unforgettable narratives. It was a good preparation, because this is where the memoir has its roots. After all, you come and go and you try to run away, but the roots are still there, oblivious to your desperate efforts.
Born in a Yemeni family, Ayelet Tsabari is exploring those roots, in a society which is not accepting her identity willingly, and often devours its inhabitants. 'In a society that idealized Western beauty standard rarely found within its vicinity - blong, light, skinned, blue eyed - I looked all wrong'. It tooks time until she had the strength to reclaim her origin, against an official narrative too often settled to erase everything that was too different, too Oriental. But while assuming that maybe 'more dancing, less thinking this is the answer', she is happy - at least for a while - to play the multi-cultural, multi-identity card, often accepting those identities assigned to her. 'I enjoyed being claimed by so many nationalities. I like the idea of having a facial structure that is malleable, shifting, as though it makes me a citizen of the world. In my desperate wish to belong, I accept every invitation'.
Every piece of her life is a small farewell to this assumed/assigned identity though. From the army service to the beaches of India and Thailand, while crossing the States and trying to settle in Canada. Every stage is well explored and documented, with the careful observation of the born writer, which doesn't mean the one who is always writer. There are those skills that makes you a writer, and the fine observation and the need to understand is part of it. 'As an immigrant, my identity was already under review, but as a writer whose sense of self was strongly tied to language, a part of me felt erased. I stopped writing altogether'. Leaving a home, means more than buying that one way ticket to nowhere, but coping with the dramatic challenges of entering a new world and its rules, including grammar rules. It takes courage and ambition and craziness and courage again to conquer your fears and start writing again in a new language. But the gift of being a writer might be stronger than the circumstances. 'English was a place I fled to, an act of reinvention that echoed the anonymity and freedom I had felt whe migrating - a new country, eliciting the same exhilariating thrill of stepping outside my comfort zone'.
But first, you should experience the deepest lows of leaving, dare to play with your life a little bit, take the risk of not writing and not trusting yourself. Her travels brought her closer to understanding those meanings of being home and away, leaving while still staying. The travels were part of her journey through grasping the sense of life, before starting to put the words on paper. This is how Ayelet describes at a certain point one of her many Indian journeys: 'Maybe this is what I'm doing here: taking a leave from my mind, my life, my boyfriend, my screw-up country. Isn't living wildly, dangerously and in the moment a good thing? Isn't that what being young and a writer is all about?'.
The memoir is not linear - which is a remedy against the boredom of being privy to other people's lives - but focuses on episodes and benchmarks on the way to settling down her own world outside the constantly moving geography of her everyday life. Like in an old Oriental story, there are episodes repeating, but in a different wording and context, recurrent motives and the repetition iterates the usual memory flow.
She pushes strong the boundaries everywhere: as a woman, Jew, Israeli, Israeli of Yemeni origin, Middle Eastern, writer, being the daughter of her early departed father. Nothing suits the mold and the search brings to life complex crystal-like new forms further nurturing the creativity. Than, there is the cruel reality: 'Leaving, I discovered, did not cure my displacement, but rather reinforced it'. Regardless how much you want to run from your roots, from your story/stories, your luggage only gets bigger and bigger and you need to recreate the mindmaps permanently. And the acknowledgment too: 'Home is collecting stories, writing them down, and retelling them. Home is writing, and it grounds, sustains and nourishes me. Home is the page. The one place I always, always come back'.
The topic and the encounters and many of the stories strongly resonates to me and I've read this memoir with both an open heart and curiosity. It's one of those reading experiences at the end of which you feel enriched and perfectly at peace with your own life. The power of the words overwhelmingly telling part of your personal story too.

Posted by WildWritingLife at 28 February