Hippie, by Paulo Coelho. A Review 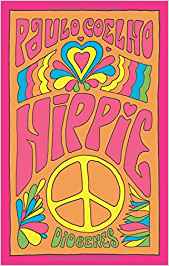 I approached Paulo Coelho reluctantly, long after he was so famous among every kind of readers, embracing the easy truths from books like The Alchemist. I don't like popular writers and the lures of cheap spirituality and this is how books like the above mentioned title looked for me therefore the resistance to ever put my money on such bestsellers.
But once I've started to read his books, one by one, I realized that in fact, in a much simpler way then Hesse - which influenced at a great extent my development as a young human - his writings answer a very simple need of spirituality and connection outside the institutional religions. And it is anything laughable or despicable to search for such a connection and follow your own spiritual path. Such endeavours can only make the human being a better person and it is a natural way to follow and develop.
I've skipped some of his books, and was really surprised by the approaches in some of them, especially in the new perspective of the famous woman spy Mata Hari, a book I've reviewed on my blog a couple of years ago.
Thus, I was very curious to read about Coelho's own (his)story as featured in his latest book-cum-memoir Hippie, which I've readed it in the German translation.
Slow paced, it outlined not only Coelho's own spiritual adventures - the main character himself is called Paulo - but also the background of a whole generation that created a new mentality, society, education system and way of making and consuming politics and especially approached to spirituality. It is a testimony of a new generation for whom sex, music, drugs and travel were wrapped in a thin spiritual cover. Although more than a generation ago, millenials can relate and be thankful for those dramatic changes that took place at the society level in the 1970s.
Paulo, together with another hippie Karla, he met in Amsterdam, are taking the Magic Bus heading to the magic Kathmandu, together with other random seekers of truth and adventurers. Their paths will separate in Istanbul but the persons they are about to become are writing the stories of a generation thirsty for new beginnings and a connection to a new dimension.
I've personally read the book as a historian of mentalities and although not impressed from the literary point of view, I'll recommend this read as an useful insight into an era as well as a good guidance into the intellectual sources of Coelho's works.