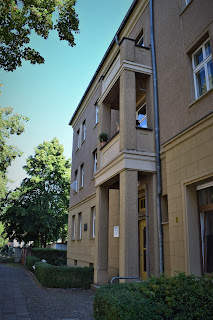 In my primary school years, back in the old country, I used to visit a lot of memorial houses and I kept a certain nostalgy for this type of encounters ever since. Visiting the house of a writer means sometimes connecting the dots between the literary work and the personal milieu. However, once my critical thinking developped, my expectations were to experience besides the personal touch of a writer's life also eventually a critical perspective of his or her writings and decisions. This goes especially for those writers with a certain political implications, as it is the case of Anna Seghers.
I grew up with the full collection of her works in French, and read some of them in my teen years. Most probably, would love to read them in German, now that I am relatively well managing this language. Also, I am a grown up today, with a complex critical thinking system and a new read will definitely shape a different perception on her works and the mentality it reflects.
Anna-Seghers Museum, under the administration of Akademie der Künste, in Berlin is situated on the street bearing the name of the writer, 5 minutes of walk from the Adlershof S-Bahn station. A couple of blocks away lived the Bulgarian communist Georgy Dimitrov. She lived at this address from 1955 until 1983, after she decided to settle in the communist Germany - GDR. During the war Seghers moved to Paris and after Mexico, where she made friendship with other communist believers like the painter Diego Rivera, together with her communist Hungarian husband Laszlo Radvanyi. At the end of the war, she lived shortly in an apartment in a wing of Adlon Hotel which was not affected by bombings.
Seghers was born Netty Reiling in a middle-class Jewish family in Mainz. (Seghers was apparently the name of a Dutch painter she become familiar with, probably through his father art business). During her exile, she wrote many of her important works, including The Seventh Cross, about the escape from a concentration camp, which was turned into a Hollywood movie. Once settled in the communist part of Germany, she was awarded several prizes and was a co-founder of the Academiy of Arts and the World Peace Council.
One of the most important reasons I love to visit memorial houses is for having a look at the libraries. What were the sources of inspiration? What were the authors preferred? Anna Seghers' library includes around 10,000 titles as diverse as the Pesah Hagaddah, Boris Polevoi (which I had the chance to read as a teen too) or Stalin's works in Russian. Originally, she was a sinologist (haven't spotted any book in Mandarin though), and I am not sure if she was fluent in Russian.
The house - whose interior cannot be photographed - includes the original furniture, including the Remington typewriter she bought from Mexico, where she wrote her books and articles.
However, what I was really missing from this memorial house, was a complex critical perspective. The visitor who is not very familiar with her works will leave with the impression that she was probably a perfect followers of the German communists. What was her opinion on the freedom restrictions in the GDR? About the incidents that other writers like Stefan Heym, who was a literary friend, went through with the local system. It is a complete painful silence that makes me feel that very often, memorial houses are just a place to have a check of the famous people's libraries.
Posted by WildWritingLife at 07 August