The Broken Lives of a Mad and Furious City 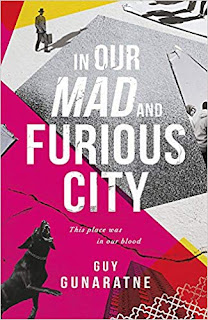 Stations Estate, North London. A summer of unrest when Selvon, Ardan and Yusuf are trying to figure out how to pass their time, in a city which turns to be mad and furious.
London has so many faces and its people are so different. Brought here from all over the world, but still one, part of a oneness which sometimes has no pity against its residents.
Written in a multitude of voices, In Our Mad and Furious City by Guy Gunaratne is a book about fellowships, broken destinies and people who are condemned to repeat the lives of their parents with no chance in sight.
It is not a sad book. The stories, written at the first person, taking the reader in dialapidates spots and hopeless city corners, are realistically told. This is how life is there. And will always be. Young men in bad futures they are.
The alternate stories create a special tempo of the story, which you slowly enter. Sometimes, for the non-English speaker, it might be a bit difficult to cope with the idiom, but using this way of talking creates a certain intimacy and genuine originality to the story.
The book has the merit of revealing worlds and personal stories that you are rarely intimate with. It's cruel, disturbing and unusual, but it has so much authenticity and the power to create stories within the stories.
It is a recommended book especially if you are interested in radicalism, minority representation and personal stories. The multi-awarded debut novel of Guy Gunaratne promises a unique literary voice that will have a lot to say, especially in 'our mad and furious city'.