'We Were Strangers Once'... 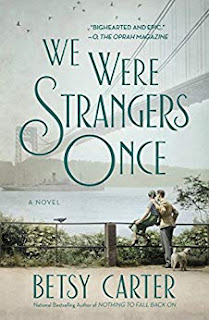 In a world which seems - again - more and more dominated by hate and lack of consideration for immigrants, it's good to be reminded that, at least in some countries - like America -  'We were strangers once'. A frequent mention of the Jewish exodus, this sentence invites for understanding and opening towards the 'stranger' because he or she, as we once, are fighting hard with social, linguistic and economic barriers which are hard to figure out.
We Were Strangers Once by Betsy Carter follows the footsteps of a group of German Jews lucky enough to escape Germany to America. The new life means that they have to give up their old prestigious jobs and social positions for a menial salary but with the promise of a life in freedom and dignity. Egon, the heir of a famous group of scientists, an oftalmologist himself, in Frankfurt is becoming the 'Cheese Man' selling cheese in a supermarket. Meyer, his journalist friend, will give up for a while his writing ambitions for doing street advertising. Their language skills are limited, therefore they end up in the regular company of each other's.
But once life starts to settle down, their lives are becoming more and more complex and so are the challenges. New people are entering the small German circle, like the Irish-born Catrina, Egon's new girlfriend, with whom he connected through their reciprocal love for animals.
Betsy Carter created a beautiful story with so many unique characters, so realistic that you might even figure them out in flesh. The story is developing in a complex way and has elegant turns, but do not expect anything dramatic or unexpected. It flows like life, in a very easy, down-to-earth still unexpected way.
The connection with the historical reality is also well done, which creates the authenticity ambiance, so important for a historical novel.
I am very happy to discover this writer and would be want to read more from her. This creates such a genuine intellectual ambiance that it's hard to escape and this effect is a real gift for a writer therefore I would be very curious to know more about her writings.