On 'Dirty Wars and Polished Silver' 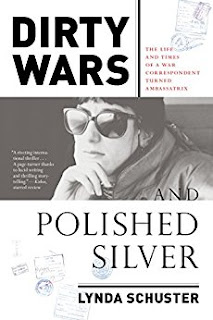 Lynda Schuster's memoir Dirty Wars and Polished Silver made me nostalgic about the way in which non-yellow journalism used to be done.
Typewriter on your lap - well, maybe this is not necessarily something to be nostalgic about - doing serious research - instead of Wikiedia copy-paste, meeting sources in real life - and not over phone or email, being in the middle of the events instead of compiling reports based on online reports. It was something heroic and engaging in that journalism which made it as a life choice, not as a job to do until better opportunities occur. Being a journalism was a profession with tremendous challenges, responsibilities but also that conferred upon the writer of the daily news a certain social status.
Former Wall Street Journal and Christican Science Monitor correspondent Lynda Schuster seen them all: Central American wars, the struggle against apartheid in South Africa, civil war in Lebanon. Her first husband, LA Times reporter Dial Torgerson was killed on the job near the Nicaragua-Honduras border. Herself, she was lucky enough to get out of a convoy that was bombed in Lebanon shortly after she and the driver decided for a different route.
But love changed her life and after she've met the man that will be her second husband, a diplomat, she continued her adventures but as a companion/wife of a member of the US diplomatic service. Gone were the days of intensive reporting in burning spots on the world map. She had to go now to the Ambassatrix School and attend lectures, among others, on 'when to use the official China embossed with the seal of the United States'. The diplomatic appointments were challenging as well, in areas with complicated geopolitical and political landscapes - as everywhere, a nice post in predictable places like Paris or Berlin are reserved for big contributors/politically supported ambassadors: Mozambique or Peru. But despite the professional relocation, the journalism blood kept running through her veins: '(...) truth be told, leaving daily journalism is similar to what smokers say about quitting: you only set a hankering when you're around it'. (Been there, done that - both smoking and journalism).
The writing is flowing easily, with ironic and self-ironic turns and a healthy balance between the evenemental layer and the personal details. The many international politics references are inserted into the story smoothly, without dramatically challenging the reader not familiar with the events. It is a rare memoir that encourages you to keep the memory of journalism alive, while understanding a woman's search for daily professional meaning. Trying her own life to avoid the 'housewife' destiny of her mother, Lynda Schuster ended up with a family, a daughter, two books written and a lot of memories that hopefully will continue to be shared in writing. Sometimes, even if you don't want to, you can see a path of balance, made of wise choices.

Rating: 4 stars
Disclaimer: Book offered by the publisher in exchange for an honest review
Posted by WildWritingLife at 22 September