The Deadly Secrets: The Other Wife by Claire McGowan 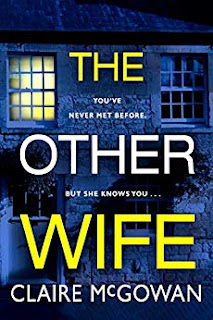 A tangle of lies, deceival and marital abuse. Two women with similar destinies, whose lives were brought together and partly destroyed by a professional liar. The Other Wife by Claire McGowan is a complex thriller of deceival and revenge, which explores the deep secrets of the angry brain.
Suzi, heavily pregnant and Eleanor/Nora a sad widow are new neighbours in the middle of the nowhere English countryside. A simple friendship which evoles to something else. More complex and unexpected. Both of them met a man that meant something to them. A man that apparently died and took with him part of those women' lives. But what actually do they know about this man?
Step by step, the novel is delving into revealing snapshots of secrets that were hidden. In both women lives there are secrets, deadly in some cases. The reality proves to be completely different and the truth is always hidden. When it comes out, it's a corpse left behind.
I've been fascinated by the technique of building the narrative, with unexpected turns and dramatic developments. All characters do have issues and bloody secrets they are easily living with and this is a pretty scary view on human nature. It might be, as one of the police officer said at a certain point that most crimes are committed by a person you know, but this dark side of humanity is terrifying. Maybe this is how it is, maybe not.
From the literary point of view, I've had often the feeling that the narrative is disbalanced as the main interest is on the characters. It's like the writer is so keen to share so much about the dark sides of them that sometimes the proper development of the plot is somewhere lost in between the cross-stories shared by different viewpoints.
The Other Wife by Claire McGowan is a chilling novel, you hardly leave it until it is finished, with a maigre touch of feminism - as both women are victims of manipulative men. A story that makes you think and pessimistically encourage you to suspect any couple you might see happily holding hands on the street. Something to think about later on.

Rating: 4 stars
Disclaimer: Book offered by the publisher in exchange for an honest review
Posted by WildWritingLife at 24 September