Forward Collection: Amor Towles - You Have Arrived at Your Destination 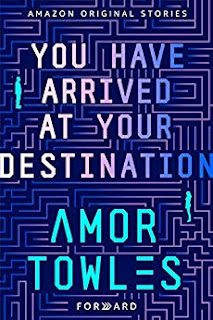 In a time of genetical engineering and Artificial Intelligence, how far can we go to 'program' our offsprings? Can we offer to our children not only an almost perfect genetical combination, but also to happily align the stars of virtue and the chances of professional achievement to offer them the path to happiness (only)?
'But our genes don't merely express who we are. They contain all manner of talents from previous generations that we may not benefit from personally but that can be passed on to our progeny'. Part of the Forward Collection which includes six stories of 'near and far future', You Have Arrived at Your Destination by Amor Towles approaches - at least at a certain extent - the issue of genetic makeup. Towles' writing that I adored in A Gentleman in Moscow two years ago flows beautifully and captivates by its storytelling magic. Sam and Annie reached an age - mid-40s - of professional and personal achievement and they are looking to have a baby. But they want the best for their baby, not like every one of us want, but in a more organised, focused, genetically-minded way. Although it is not highly precise how exactly they are supposed to control and direct the future of their progeny, Sam is visiting a fertility lab, Vitek, where he is shown three possible outcomes of his to-be-born son (the gender was apparently easily determined just during the talks about the possibility of a child).
However, once Sam is leaving the lab, the novella - which like the other books from the series, can be read in one hour-long sitting - is taking a completely different turn. The second part has nothing to do with a possible discussion about the pros and cons of genetic engineering or other ethical issues. A good idea to avoid predictability and literary boredom. However, I haven't found satisfactory, story-like, the rest of the story which is like a mosaique of disparate, grotesque episodes.
The story is literally broken and the pieces are never brought together and this is how I got lost. It is not like Sam is starting to put into question everything around him, including his relationship with Annie - an assumption I've seen repeated in reviews reproducing the original release description. It is like the reader lost completely the contact with the characters from the first part. Ironically, Towles maybe is trying to convince us that not only the genetical engineering cannot control everything but also the creative process is sometimes against the logical neat projections. However, out of an infinity of choices, not the best one was selected in the end. Hence, the disappointment.

Email ThisBlogThis!Share to TwitterShare to FacebookShare to Pinterest
Labels: 3 star book review, amor towles, forward collection, Novella, you have arrived at your destination