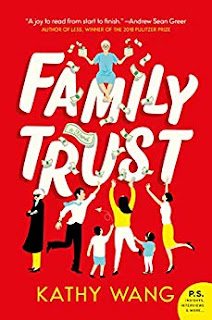 There is something that I couldn't grasp as for now when it comes to Asian literature in the English language: why most of the characters are so greedy and put financial interests of any kind besides any other purposes in life? The fact that there is a pressure on children, especially the first or second generation of immigrants to outerform in professions as doctors or lawyers I can fully understand, in my world - which is not Asian - such jobs are enjoying the highest prestige too and therefore the children are kindly directed towards such achievements. But why in the end the social status and the intellectual achievements are obsolete faced with the financial projections?
In Family Trust by Kathy Wang, most characters are utterly despicable, in a vicious way. When Stanley Huang, the family patriarch is about to die, on the lips and minds of everyone, from his children to his ex-wife and his younger wife, Mary, much younger and with a rather modest background is: what about the will? How much everyone will be left with? How much are Stanley's assets worth, by the way? Those questions are making the round of the characters and are influencing their life decisions and paths and are further echoes in the lives of other people involved, including Mary's poor and greedy first grade relatives.
I am not a blind feminist, and I have my own limits when it comes to -ism(s) of any kind, but the women in this book are completely despicable. They are thinking about poor Huang's money obsessively, and not only those without a professional future in hand, but also his daughter Kate, a relatively successful business woman in Silicon Valley. And this feature extends to the women outside the family too, as Fred's fiancée, Erika who, unhappy with her ruined prospects of marrying him, she sent a circular email to his work and business colleagues revealing his porn habits. Erika is Hungarian.
At certain moments in the development of the plot, there are however some delicate hints about the pressure put on women: to marry, to outperform, to be silent and just accept to count in the mathematics of political corectness. Still, it does not explain fully why they should be so monomanic in searching for opportunities of free money. Maybe it's my fault for not being privy to anyone like this in my inner circle or not being one of them myself.
The negative character threats of the people in the book does not diminish the good writing though.