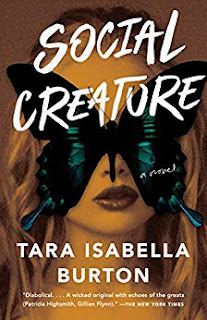 Lavinia is a glamorous NYC socialite, taking a sabbatical from Yale to write her novel. Louise is a poor girl that landed in the famous city fighting hard to make the end of the month, by tutoring, bartending and ghost writing.
Accidentally, two met, are becoming best friends and it seems nothing can stand Louise's chance to writing fame and a good life. But as usual when it comes to the dynamics of the relationship between two beings - regardless the gender - there are tensions and jealousy and a requested dependence that Lavinia is requiring from Louise after they moved together and Louise is losing one by one her contracts as unable to balance the non-stop-party-life and any work schedule.
In Social Creature by Tara Isabella Burton you are welcomed in the vain and wasted life of NYC money heirs and their glamorous social life, as well as their satellites, made of 'yesmen/women' always keen to comply in exchange of a bit of networking and some free gifts. But everyone is equally longing for attention, either it comes to a haircut or a fancy opera show. Almost everyone is writing a novel or is an aspiring writer in this story when they are not busy listening to Wagner or name dropping the people they have lunch with (which it is not necessarily an exclusive NYC-thing those days).
Over a quarter of the book is mostly about this. The rest is a murder story in the 2.0 age, where the criminal - which might be in fact serial - is not caught while it keeps intensively posting updates on the victim' social media channels. The innocent Louise is in fact a completely different person as she shows. A very dangerous revengeful, socio-path one. Not only the thief who is using Lavinia's generous credit card to sniff some hundreds of dollars every day. She will actually will end up killing Lavinia - and not only her - in cold blood but no one notice that something is not fine.
In full honesty, I liked the writing style a lot. Witty dialogues, creating that realistic landscape of the snobbish rich white collar Americans in their 20s. However, the 'crime' part lost me, and if not reading the book while commuting an impressive amounts of trains I would probably would not have finished it. I may reckon the writer did not want to write a thriller story, but at the end of the book still did not figure out how to integrate the crime part into the overall story. It looked for me as the momentum to make the writing even greater was completely lost.
I leave at this for now, but I will definitely look more about Tara Isabella Burton writing, especially non-fiction that I've heard is really good - particularly the travel-related one.