'Maybe You Should Talk to Someone' 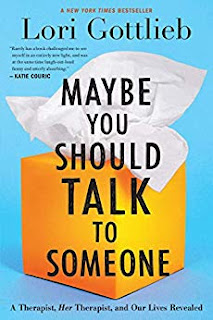 'Therapy elicits odd reactions because, in a way, it's like pornography. Both involve a kind of nudity. Both have the potential to thrill. And both have millions of users, most of whom keep their use private'.
Even therapy is relatively widespread as a psychological remedy in the US and Western Europe, it is still associated with stigma. If you are seeing a therapist, you might have a 'problem', a serious mental issue so better not to deal with such persons, or at least be cautious. But sometimes, you really should talk to someone. Someone completelly neutral and with experience in the field of human relations and psyche. Either it is because of a breakup or a deep depression, a childhood trauma or inability to cope with the daily chores, you should talk to someone.
Lori Gottlieb offers extraordinary, humorous sometimes, insights about the life and work of a therapist that herself had to go through therapy. Yes, therapists are humans too.
The experiences shared are deeply human, with what involves contradictions, fear to go beyond an episode by fear of a scary big picture. Many might go to therapy looking for a solution to their problem or to a confirmation of their mindset. Rarely they get what they want, but they could actually leave with a completely different, and better outcome.
Maybe You Should Talk to Someone deals not only with the stigma around emotional struggle but equally with the intricacies of taking decisions and change in general. Which change is not an easy task at all. 'We can't change without loss, which is why so often people say they want change but nonnetheless stay exactly the same'.
It is also an honest book about what exactly therapy means and the many mirrors we, as humans, we need to reflect ourselves. It is based on the author's own experience, which adds more authenticity to the writing. 'Sometimes we are the cause of our difficulties. And if we can step out of our own way, something astonishing happens'. But this dramatic step can rarely be taken without support. Therefore 'Maybe You Should Take to Someone'.