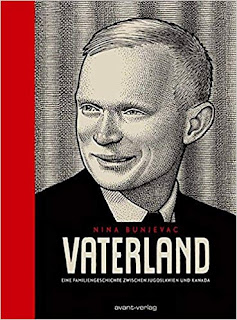 Overwhelmed by the constant bad and scary news coming from a region close to my heart and mind, the Middle East, I am drawn lately back to the Balkans, another region where I left pieces of my heart and precious time. During the many wars in this region, called the 'power keg' of Europe, I got to know the intricated personal histories and especially wonderful people whose life was suddenly broken by the absurdity of an ethnic conflict that was actually boiling underground for many years.
Expressing this load of information as a graphic novel is a risky approach as it floats over the accusation of not being able to properly cover at least a quarter of the many details of the conflict. Which is indeed true, but someone needs to take the risk.
Nina Bujevac's Vaterland (Home Country, I've read the book in the German language) is half-memoir, half-historical report, covering her father's and family destiny before the Yugoslavia was created and during the Tito years. A very complex task.
My first impression has to do with the graphic itself: black-and-white, in a semi-pointilliste, semi-realistic style. I really liked it and it make the reading more pleasant if there will be just some clumsy cartoons threw over the white page. After all, 'reading' a graphic novel has a lot to do with the illustrations.
The book is organised in various autobiographical sections, where sometimes the information is repeated which helps to deal easily with the information. Which information is very well written, although it has to do with a complex quarter of a century: from the different rivalities between Serbs and Croats during the war to the active - and sometimes terrorist - anti-communist Serbian diaspora to the dramatic moment in the European communist history represented by the dissidence of Milovan Djilas. This information is spread in between long stories of various family members of the author and his memories from the time she spent far away from her father in Canada - involved in terrorist activities of the Serbian diaspora - with her grandparents, mother and sister in Tito's Yugoslavia. In a way, I would have been curious to find out more about the daily life during those time, a curiosity not satisfied by Vaterland.
I've read the book in one sitting, keen to devour snippets of old information while immersing into the story.
It was good to be back on the heavy ground of Balkan history. A graphic reminder that the whole world can be at any moment a 'power keg'.