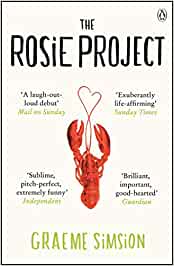 It seems that I still haven't found a book to love which deals with various details of Asperger, or the autism spectrum in general. Some are simplistic and some are just so plain that only the curiosity about the topic in general convinced me to finish the book.
For instance, The Rosie Project, by the Australian author Graeme Simsion. Highly recommended by a variety of readers, friends and bok lovers and an international bestseller, it failed to impress me at all.
Don Tillman is 40, an accomplished university professor that decided to start a minutious project of finding a wife. This romantic investigation involves a long questionnaire covering topics such as love for mathematics and food habits.
Don has a couple of issues, though, that he describes himself - the book is written at the first person: 'But I'm not good at understanding what other people want'. He's fine but just 'wired differently'.
He meets Rosie, a PhD candidate in psychology, which is completely the opposite of the profile aimed to be created through the answers to the questionnaire, with whom he will fall in love and finally marry.
The continuation is The Rosie Effect, a book that I promise to read, by curiosity, in the next days.
My problem with the way in which Tillman is presented is the unidimensional character he introduced. You can live and be happy and have relationships when you suffer of different manifestations of autism spectrum, but it is not easy and enjoyable. Especially for the person that may love you and cannot understand what is wrong, why some reactions are lacking any human empathy. Living with someone that has obsessions, OCD, has a limited or any emotional intelligence is not a pleasant experience and besides the blind love you need professional advice and a deep understanding of how such issues may change and evoluate over time.
True is that the book is written at the first person and it may explain the limitations of the character. Still, from both the literary and scientific point of view it is not an inspired technique.
Talking about the literary style, I was not impressed either. The story is written as a big journalistic article, which is not intrinsically a bad idea but there are many other ways to do it in a better literary way.
Let's hope Rosie Effect will surprise me somehow. To be continued...