Book Review: 'It Can Be Arranged' by Huda Fahmy 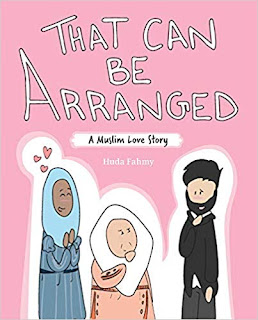 The topic of arranged marriages - regardless the religion --- enjoys a considerable popularity, being often considered with curiosity yet repulsion for its unnatural approach of free love and choice of partners. It's just an observation, as I do not want to start now a critical discussion either about this choice of topic nor about the issue of arranged marriages in general.
That Can be Arranged. A Muslim Love Story is a graphic memoir about how the author Huda Fahmy met her husband. It has a lot of similarities with Ayesha at Last as it has to do with marriage between observant Muslims, except that it is mostly expressed as a graphic novel and is autobiographical. Personally, I liked Ayesha at Last but I've read reviews by Muslim bloggers who were not so impressed about it so I suppose besides the literary standards the approach of the content makes a difference between curious people about other traditions and culture and those who are part of the respective culture.
Huda Fahmy prefers rather to be single than stuck in a horrible marriage. Although she is to meet her matches in the classical way - after they get in touch with her father, a research via CV of the potential match takes place and the meeting is taking place in the presence of the mother - she is the one who will chose in the end the one and only, who will later become her husband. Long before they met 'officially' she saw and liked him and only further circumstances made the encounter possible. Her story adds a note of diversity to the main story of visible Muslim women in America: she goes to university, loves Jane Austen, her parents are divorced, she is interested in someone to connect with spiritually and less in the dowry. It is an unique story which invites the reader to open his/her mind and accept diversity without too much ado.
I've found the voice of the writer authentic with hilarious accents, which makes the story readable for the less knowledgeable audience. I only was not impressed by the illustrations.

Rating: 3.5
Disclaimer: Book offered by the publisher in exchange for an honest review
Posted by WildWritingLife at 06 January