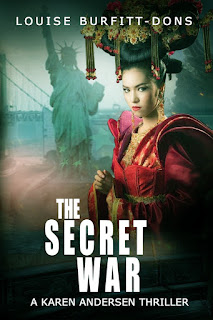 The reason I am so much interested in reading as many books as possible that are set during the last Covid-year is my curiosity for literary interpretations of ongoing socila and political events. Catastrophies of all kind are a volatile yet inspiring environment therefore my almost impulsive reaction to abandon anything else for a sip of literary reality.
The Secret War by Louise Burfitt-Dons is the third book from the series featuring police investigator Karen Andersen. I haven´t read the previous ones but it was no problem for me to focus and understand the latest installment. Starting in the UK - Liverpool - but with ramifications all over the world, mostly China and US, the book is a fast-speed political thriller with international implications. Andersen has a seven-day deadline to stop a deadly biological attack on New York city controlled by a conservative division of the Chinese Communist Party. It displays the dangers of bioterrorism in a world confused by fake news and unreliable online information, in a time of world crisis.
The topic in general is very sensitive and requires a smooth and smart approach which Louise Burfitt-Dons skilfully did. Many of the international references are on point and it creates a great background for the unfolding actions and particular story, without oversimplifications and easygoing stereotypes. I am not extremely pleased by the cover is despite being spectacular and colourful it is stereotypically inaccurate - which Communist Chinese is dressed like this, anyway - but otherwise the story is purely inspired on various scenarios and geopolitical assumptions.
The book reads fast, with the rapid fire of words being exchanged between the characters and fast successions of scenery. I can see this book as a good action movie too.
The Secret War is a recommended reading choice for anyone passionate about political thrillers with a taste for world threats during threatening times.
Rating: 3 stars
Disclaimer: Book offered as part of a book tour but the opinions are, as usual, my own.
Posted by WildWritingLife at 02 July