There are normal times and extraordinary times - when ´extraordinary´ does not always mean ´good´. People may stay the same, only their character features are put on trial or polished by the extraordinary circumstances. The way they are though is there, expecting the right or wrong circumstances to manifest. 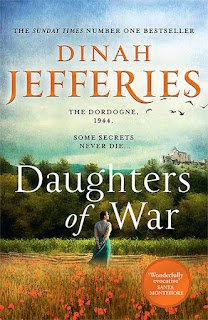 Daughters of War, the latest book by the bestseller author Dinah Jefferies, is exactly about those kinds of circumstances and people who are influenced by it. Three sisters - Hélène, Florence and Elise - are living in Dordogne, France. It is 1944, and France is at often at the meeting point of war confrontations of all kinds. There is the Maquis, the Resistance movement, and the Brits as well as the Germans and the French Army itself who may interfer with the story during the timeline. The three sisters are under pressure to outlive their times, but not as passive actors, but as becoming - in their own particular ways - actors of history itself.

The story enfolds slowly, giving time and space to the characters to develop. The darkness of war time is lightened by the transformations the characters - the women characters particularly - are undergoing. The dialogues are creating the proper ambiance which is completed by background storytelling exposing the hardships of the WWII and the Nazi-occupied France. The net of the story is knitted from one point of view to another, expanding the expectations and the possibilities.

Each of the three sisters are very well profiled and I loved the diversity of the points of view they reflected. The fact that they are forced to take decisions outlined their character features and their personalities. Besides their dialogues and interactions, the internal thoughts are outlining the full character features of the characters. Personally, I would have expected more bold action on their behalf and more stubborness in acting on behalf of the good, but as in real life, I should learn being tolerant and patient with the reasons why some people are just different from me.

Writing about those times is very sensitive and I had often the feeling that the author remained evasive and more focused on the characters than on the events as such on purpose. However, the writing and storytelling are irresistible and the reading experience is up to the expectations. I´ve read previous books by Jefferies before and the genuine empathic and approachable writing style is entincing for any kind of book lover. It is a guarantee of a story well told, no matter how difficult the circumstances are.

Reading Daughters of War is a special literary journey I am glad I was offered the opportunity to be part of. This new encounter with the writings of Dinah Jefferies are a reminder that I may have on my Kindle some of her books that are worth reading rather sooner than later.

Disclaimer: Book offered as part of the book tour but the opinions, are, as usual, my own

Posted by WildWritingLife at 20 September