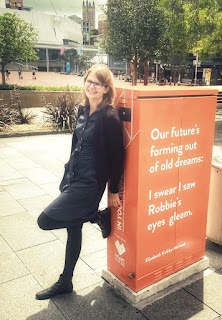 The grief of dealing with the suicide trauma cannot easily put into words easily. The proper use of the words is lacking because we are rarely prepare for it. We cannot document, research, evaluate and compare the words. We need to mourn and figure out how to explain the void of the person who just left us. We may feel guilty as well, for not being fast enough or informed enough or empathic enough to save him or her.

But what are words needed for in such a case? Other than for our own internal emotional use...Words are nothing actually. They are just the living proof of our failure. 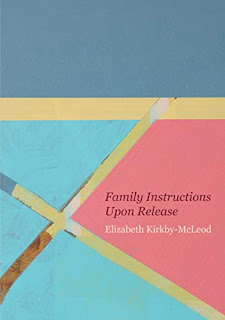 Elizabeth Kirkby-McLeod lost her father to suicide in 2012.

´He was found after he took a fistful of pills,

deciding Death would take away pain´.

I can think about Family Instructions Upon Release as being read on a sober, deep, slow paced voice. Using fragments of both Twelve Angry Men and Fact Sheet 4 - Suicide and Self Harm it outlines a story. Of life and decision to die. His father´s.

The author´s choice is at the intersection of tropes and even the visual positioning of the letters and the words they are creating. The format and the content, both are unexpected, as there are the sources of inspiration. It seems like the words are flowing sometimes in the same direction with the memory, sometimes against it. Sometimes, they just spring up, out of the author´s control. This is how the map of life and death is set. The life and death of a man that decided to end up his life.

There is a limited dictionary and words are not all - in the everyday and literary life as well. But there is the lack of words who is leading to depression and hopelessness. The grief has its own language and Elizabeth Kirkby-McLeod - my first ever writer from New Zealand - created a both visual and wording mix which corresponds to the moment. It defines and tries to explain the moment, in its both emotional and literary complexity.

Writers and artists do have their own ways in coping with trauma and unexpected traumatic events in general. They have the power to substract the essence of all it and share their experience with the rest of the world. While being a contribution to the world literary heritage through the experiences shared and formalised, it helps at the same time the rest of us, the readers, to see the world and life, even in its deepest saddest moment, through different eyes.

The cover is an elegant rendition of the wordings.

Disclaimer: Book offered as part of the blog tour but the opinions are, as usual, my own

Posted by WildWritingLife at 27 September