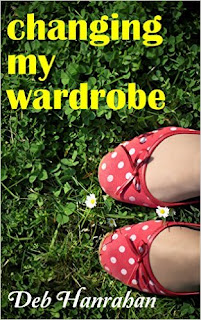 Long time ago, I took an online class about cyber bullying, many years before the omni-presence of social media. At the moment, I did find the phenomenon very scary and as dangerous as a lethal poison, but following recent stories in the media or personal accounts of friends with children of different ages, it seems that nowadays the extent of the phenomenon is much extended and often takes deadly turns.
Changing my Wardrobe, by Deb Hanrahan is telling a bullying story, covering the experiences of a group of teens entering the final years of school. The pace is slow, with a certain routine of the characters and almost unpredictable events. The plot in itself is captivating, well writen, keeping the reader till the terrible end of the story.
Lindsey is getting ready to enter a new school stage and accepts the help of her friend Teeny to change her wardrobe as a start for a new life. Together with Teeny's twin Grouper, they go to school and spend a lot of time involved in various school activities. The group is extended by the tragical figure of Marco, the love at first sight of Lidsey, and excentric Jocelyn, the future match of Grouper. The happy ambiance is disturbed by the bullying Avery and her clique who is just continuing her stalking against the girls that started during primary school. Joined by her boyfriend Cal, the troubled cousin of Marco, she will try everything possible to disturb the life of the girls, either by attacking them verbally or by various actions, such as breaking into Teeny's locker or taking pictures of her half-naked while changing in the dressing room and sending it further to her list of contacts.
The author succeeds to outline very well the psychology of the bully: most often someone abused  her- or himself by the others, including by its own family. Cal is a child abandoned by his disfunctional parents, while Avery is the daugher of a very demading mother who does not miss any chance to humiliate her in the front of the others. The reinsertions of family histories was done very skillfully.
What is not plausible in this story is how adults are not acknowledging the situation. When the phenomenon is extended over so many years, how it is possible that no adult - parents or teachers - ignore the situation or let it go this way. Another episode that was not easy to deal with was the one when the picture of Teeny was sent without that being considered a very big deal. In some real life situations, teenagers commited suicide for such an accident, so I think the reaction of the girl was very much underrated. The reaction of Teeny's twin, Grouper, after finding out all the details that lead to the temporary arrest of his sister by the police after Avery placed the marijuana brownies in her locker is also very surreal: 'I knew my sister was innocent'. This reaction contradicts his behavior described as of bad temper.
The characters are well defined, teenagers with their insecurities and weaknesses. The reaction of rejection of Jocelyn by Lindsey on the basis of his 'weirdness' although a couple of times she saved her from Avery proves that at this age, everyone can be a bully. Sometimes, the way in which some of the characters are expressing their first love feelings resembles more the experienced adult love than the teenage innocence.
The end, when Cal come back after hiding for a long time after the cookies episode, to seek revenge for being separate for ever from Avery, brough by her mother to a fancy college on the East Coast, tries to kill Teeny but Lindsey interposes and is killed instead, is spectacular. It occurs at a moment of the reading when you do not expect anything out of normal to occur any more.
I haven't tasted too much the last pages, when Lindsey meets on the other side Marco's mother and little sister that died in an accident couple of years ago. It made me think about kitsch movies with angels talking together from puffy clouds. Also, the fast love story between Marco and Teeny did not make too much sense and was not prepared during the plot development.
There were two other things I did not enjoy: the cover of the book - nowadays, with the access to so many online photos, there may be thousands of other good pictures to chose for the book; and the title - that is very low profile for the otherwise interesting writing.
The book is recommended for anyone interested to explore the mentality of bullying and have a sample of the usual problems of high-school children.
Posted by WildWritingLife at 30 January