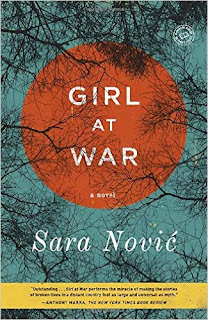 During many of the Balkan wars, I used to be a very young journalist, with a serious history background, interested about politics, and covering foreign affairs. For many years, I constantly remained interested about this part of the world, including through many visits on the ground, temporary work for international projects and friendships I made. I was particularly interested in understanding the mechanisms of ignoring the fact that mass murders were taking place in the middle of a civilized continent. It happened once, but the proximity with those events made my intellectual investigation even more relevant. However, the international ADHD moved towards other horizons and I also got new interests, while forcing myself though of keeping an eye on the intellectual debates and political evolutions in the region.
The Girl at War brought me back to those glorious times of optimism when I was confident that I can bring a completely new and fresh interpretation of human everything. It is a story of the Croatian-Serbian war, through the eyes of the little Ana. How you can explain war to a child? How the former friends becoming enemies are seen through the chidren's eyes? A very anecdotic detail, such as a beard, receives different significance: 'I wanted to know what a beard had to do with being sad, why the Serbs had both the JNA and the Cetniks on their side and we only had the police force, but my mother set a knife and a bowl of unpelled potatoes in fron of me before I could bring it up'. War insidiously entered everyone's life, nowadays more throughout than before, due to the television and modern communication: 'As a side effect of modern warfare, we had the peculiar priviledge of watching the destruction of our country on television'.
The story takes a dramatic turn when Ana's parents are murdered by drunken Cetniks in a common grave, while returning from Sarajevo where the little Rahela was sent to America for treatment. Ana escapes and for the rest of the story she is trying to cope with the loss and her survival. She follows her sister in the States, being adopted and started anew everything. And she got a new family 'new, like I had traded one family for another in a used-car deal'. The 'new' life is the struggle to obstruct the old memories: 'The more I lied, the closer I came to fitting in. Sometimes I even believed myself. People assumed I was just bookish or shy, and I was, or had become so'. The present is a projection of the past and read through the keys from the past. The 4th of July celebrations, for instance, are a reminder of the bombings during the Serbian air raids and thus, a frightening experience not an enjoyement. 11/9 is a reminder of the tragic repetability of global drama.
Ana needs to come at terms with her past, so she returns to Croatia. The processs starts with her invitation to present her testimony as a former child soldier in the front of an UN gathering. From her personal relationship to the professional dreams, she takes a break, getting back to the country that stole her childhood and her parents. But there is also Luka, her childhood sweetheart, to whom she wrote many letters left unanswered.
Their meeting, after so many years, is in my opinion the main downside of the book. It is like the author just wanted to introduce this episode in order to finish it as fast as possible. The last part of the story, in fact I enjoyed the least. The first three quarters of the book are very emotional and strong, while the end is far beyond expectations. Politically speaking, the book does not mention the Croatian war crimes of Gotovina. During such troubled times, the victim and the perpetrator can switch seats too fast.
It is the merit of the book to bring back to the public attention those too-fast-forgotten wars. It investigates the impact on everyday life of traumatic memories and it is doing it by outlining the fine intrusions and reinterpretations and self defences.
It is a book I enjoyed reading without interruption. It makes you take life and writing about life more seriously.
Rating: 4 star book
Posted by WildWritingLife at 09 July