Books that make you think: The Sympathizer by Viet Thanh Nguyen 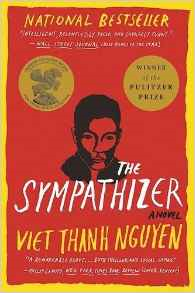 I tried to keep myself as much as possible away from books about the Vietnam war, because for me it is one of those situations when it is hard to pledge the part of the white vs. the black. Ideologies and propaganda played hard on both sides, with me caught in the middle trying to discern the lights from the shadows. The fictional representations about this present historical episode are tainted by appealing discussions creating trustworthy arguments for both sides. For instance, I used to love 'Hair' and tried to understand 'Apocalypse Now', but still didn't change my assumption that communist did any good to the people.
The multi-awarded, owning also the 2016 Pulitzer Prize for Fiction, Sympathizer is a different contribution to the discussion about Vietnam war and identity in general. The story is told by an unnamed spy on behalf of the communists, former film consultant - for a production whose description has many analogies with 'Apocalypse Now' - former Viet Cong combatant, inmate in a communist reeducation camp, French-Vietnamese, the result of the illicit relation between his Vietnamese mother and a French missionary priest, American immigrant and future boat people. The overload of identities and memories plays the story on different levels, exploring feelings and identity segments without ever bringing the discussion to an end. It is not only a situational game, but a story permanently told and retold, reimagined and rephrased, in different contexts. Thinking about who you are is a curse, and being an immigrant is a bigger curse which creates identity dilemma and confusion. The way the others see you is often the result of stereotypes - 'you speak a good English for an Asian' for example - the way you see the others is the result of these stereotypes - like you expect most of the 'others' to see you as a cartoon of yourself.
Is there any end to this story? Writing and filling the empty space with words, the way in which Viet Thanh Nguyen does, challenging the words to tell the truth. It is not a book that delivers you some truths, but forces you to think and explore the ready made ideas about yourself and the world around you. Literary mission accomplished.
Rating: 4 stars book

Posted by WildWritingLife at 25 July