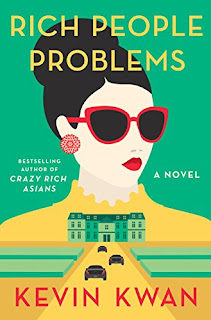 The third and last installment of the Crazy Rich Asian series, Rich People Problems is back with a slightly different novel which maintain the absurd and non-sensical lavish ambiance of the previous books but adds some insightful unexpected details to this hilarious family saga.
Su Yi, the matriarch of the family is on her deathbed and the future inheritance of Tyersall Park is unknown but creates suspense, envy and tensions among the members of the clan, reunited from all over the world. One of them is the grandmother's favorite, Nicholas - Nick - who was considered a disgrace after marrying for love to an educated woman with an 'inferior' pedigree. He arrives just in time for a reconciliation, but his presence only increases the tension and the suspense which will continue until the will will be read after Su Yi's death.
As in the previous books, there are a lot of gossips and envy and many many brand name dropping, psychotic characters paying thousands of dollars for an eye lift for a fish and soap opera intrigues. Forget the children of the Russian mafia featured in glossy magazines with golden toys and limited edition high-fashion designer clothes, Singapore tycoons - naming their children Harvard, Carlton or Scheherazde - can do it much better.
There are also subtle observations about the evolution of wealth and the matrimonial alliances, mostly uttered by the only fully coherent character, Nick. After his favorite noodle bar, Sun Yik, disappeared, he uttered a long lament about the fate of Singapore: 'Everything I love about Singapore is gone. Or it's disappearing fast. Every time I'm back, more and more of my favorite haunts have closed or have been torn down. Restaurants, shops, buildings, cemeteries, nothing is sacred any more. The whole character of the island I knew growing up is almost completely obliterated'.
Another complex and insightful character is Astrig Leong, who after a complicated divorce and the permanent pressure from her family to conform to the model assigned decided to break free and find herself on a small island in the Philippines.
Especially the last 100 pages of the novel are surprising and add elements of spy novels to the many pages dedicated to real estate tycoons and extravagant private jets rides to buy millions worth dresses. Apparently, Su Yi was modestly hiding many secrets, including a love affair, and her extraordinary services during WWII changed completely the fate of Tyersall Park.
Although one may find the topic too soft, the book has a good structure and there are enough characters that can be easily loved. Kevin Kwan is obviously a writer whose talent can go beyond the glossy magazines intrigues and I am curious what will be the next novel after the Crazy Rich Asians saga is over.

Rating: 4 stars
Disclaimer: Book offered by the publisher in exchange for an honest review
Posted by WildWritingLife at 21 May