A Terrific Psychological Thriller: When You Disappeared, by John Marrs 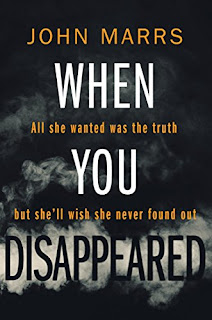 When Simon, the happy half of a wonderful British family , a man in his early 30s with a promising architect career suddenly disappeared his devoted wife, Catherine, cannot believe that only death set them apart. But the truth is cruel and will stay hidden for the next 25 years.
Written as an alternating diary of Simon and Catherine, a step-by-step mention of going out of grief, the weight of the past or the family responsibilities, When You Disappeared by John Marrs is a page turned, although predictable at a certain extent. Although some revelations are not surprising - for instance, who killed the younger son, Billy - the psychological weight of the stories is dramatic and displays a great storytelling craftmanship for this genre.
From a scene installment to the other, the perfectly evil nature of the ambitious architect is revealed, a display of how delusional are the appearances. Simon himself became a serial criminal from a delusion, an apparent affair of his wife with his best friend who had actually a crush on him many years ago. A quarter of century later, he is confessing to the brave Catherine, a fantastic character with strength and an outstanding desire to live her life, whatever the circumstances. The dedicated wife from the first months after the mysterious disappearing - 'The strength and support he'd shown me during the worst thing that could ever happen to a parent, had proved he was a fantastic husband and dad, and I desperately needed to believe that he was alive' - is turned into a hard working bread winner and the strong woman who won against a terrible malady and was powerful enough to start a new life and even face the truth of the lies and crimes of her ex-husband.
It is a dark novel, going deep into the murkiest corners of the human mind, telling as often as possible in different wordings that the humans can be sometimes slaves of their strong self-destroying criminal emotions, especially if there is a genetical predisposition to it. I am not sure about this, but meeting the literary character of Simon might be just enough for a while.

Rating: 3.5 stars
Disclaimer: Book offered by the publisher in exchange for an honest review
Posted by WildWritingLife at 29 October