Welcome to the House of Spies 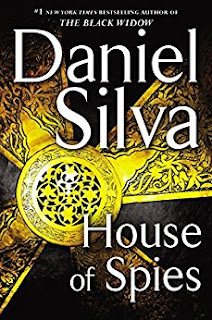 After the Black Widow, I curiously waited the new adventures of the Israeli spy Gabriel Allon, now chief of the intelligence service. There is something addictive in the way in which Daniel Silva is telling stories about terrible events and complicated geopolitical structures, with the historical, intelligence and political background gently introduced into the narrative.
House of Spies is following Allon's efforts to annihilate Saladin, his no. 1 enemy, the creator and orchestrator of a 'new generation of suicide warriors'. Based on the main trademark of Saladin: 'He believed that in terror, as in life, timing was everything', he creates an international team which is trying to decipher his traces going from Marseilles until the hidden corners of Morocco. 'His target was a man. A man who had built a network of death that had laid siege to the great cities of the civilized world'. As his main profits for investing in the terror plans are the narcotics, the intelligence agents are going back to the origins of the narcotics trade in Europe. As in all the previous book from the series I've read, it mentions current events and world stage evolutions, which are inserted into the story, such as, for instance, the fears of the cybercaliphate: 'Martyrs-in-waiting would be radicalized in hidden corners of the dark web and then guided toward the masterminds they had never met. Such was the brave new world that the Internet, social media, and encrypted messaging had brought about'.
Until the very end of the book, there are interesting spectacular turn of events taking place, with unexpected changes and challenges and breathtaking surprises. What I liked less what the insertion of some new age elements, with some jinni hungers praying near a toilet seat in Morocco and some future reading lady in Corsica.
Right now, I set the countdown until the next book by Daniel Silva. Maybe I can fill the waiting time with some of his 17 books I haven't read yet.